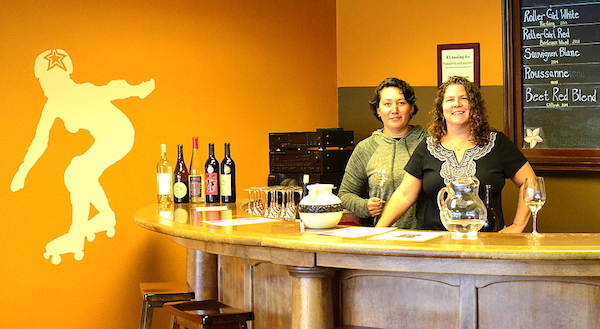 Elaine Jomwe, left, and Tanya Woodley of SuLei Cellars in Walla Walla, Wash. The winery is looking to expand its production and, perhaps, a second tasting room. (Photo by Abra Bennett/Great Northwest Wine)

WALLA WALLA, Wash. – SuLei Cellars is the brainchild of Elaine Jomwe and Tanya Woodley. They’ve known each other for half their lives, been together for 16 years, have been married for nearly three years, and are celebrating the 10th anniversary of their first harvest.

Theirs is a story of hard work, dedication, methodical planning, good luck, and a passion for wine. The fact that they share all these traits is the lifeblood of SuLei.

Jomwe was born in Hawaii. Her last name, (pronounced jamoy), comes from her father, who is from the Marshall Islands. She grew up in Myrtle Creek, Ore., not far from Woodley, who was born in Vancouver, Wash., but raised in Medford, Ore., and around the Portland area. They met in 1995, and have been on the path to building SuLei Cellars ever since.

The winery’s name reflects their combined heritage. Woodley’s middle name is Sue, and Jomwe’s is Leilani, hence SuLei (pronounced SOO-lay). Together they discovered and nurtured a passion for wine.

It all started when they tasted a Kendall-Jackson 1997 Cabernet Sauvignon. They bought a case, and loved it. And then, Jomwe says:

“When the 1998 came out, we got a bottle and it wasn’t even close to the ‘97, and that really piqued our interest in how vintages are different, and how grapes are grown, and the various regions. We were living in Portland at the time, and we started traveling to California, and to the Willamette Valley, and along the Gorge area, tasting wine.”

“I want to be a winemaker” 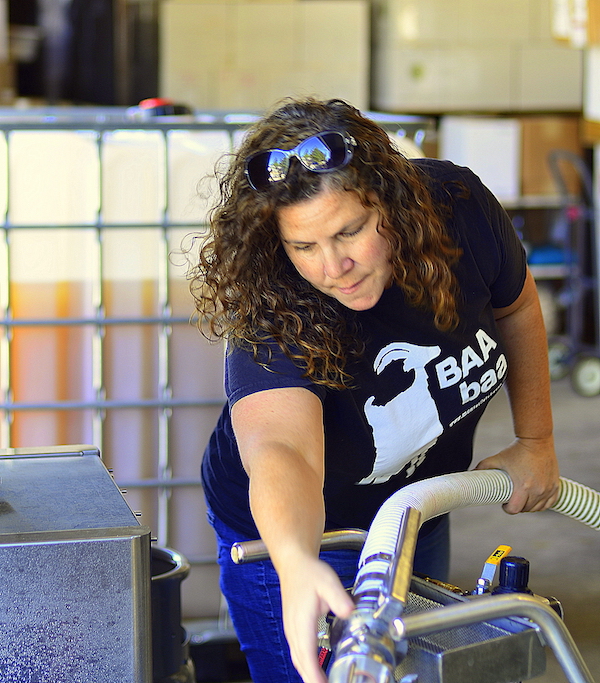 Tanya Woodley is the winemaker for SuLei Cellars in Walla Walla. She learned her craft at Walla Walla Community College. (Photo by Abra Bennett/Great Northwest Wine)

Jomwe, who has a degree in business management from Portland State University, had been working as an accounting manager for a large Portland firm for eight years when, as she tells it:

“Tanya came home one day and said ‘I think I want to be a winemaker.’ And since I had the business side, it made sense for her to get the winemaking side, so that we could start a winemaking business together.”

Today, Jomwe runs the business side of SuLei, although she pitches in on all the rest of the work as well. She also has a day job, working at Seven Hills Winery doing their bookkeeping and compliance, where she’s been for the past eight years.

Woodley, who came to wine from a background of 18 years in the music industry, found herself attracted to the creative side of winemaking, as well as the science side.

“I started by making kit wine, and not very good kit wine,” she says with a grimace.

Knowing that there was better wine out there, and knowledge to be gained, the couple continued traveling to tastings near and far.

Falling in love with Walla Walla 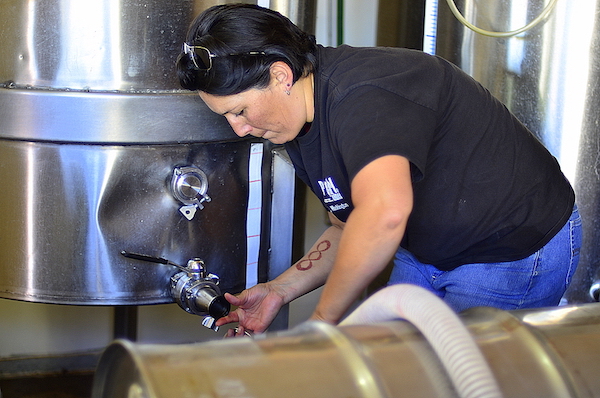 “We went to one tasting where Walla Walla wines were featured, and I remember we tasted the Whitman Cellars Narcissa, and I just fell in love with it,” Woodley recalls. “So we started focusing more on Whitman Cellars wines and Walla Walla wines, and I really liked the style. I knew I wanted to be in a warm growing region, so we started doing our research, and looking at schools. There’s a great program here in Walla Walla, the enology and viticulture program at Walla Walla Community College, so that sealed the deal.”

In 2005, she gave two weeks’ notice at work, moved to Walla Walla and enrolled in the program, and started working at Whitman Cellars during her first month in town.

Her close association with Whitman Cellars spanned her studies in the two-year program, and it continued beyond her graduation in 2007. She started at Whitman Cellars as a harvest intern, and then kept dropping by after the school term started, tagging along after Whitman winemaker Steve Lessard, helping out for free, in exchange for hands-on learning.

“Whenever I wasn’t in school or studying, I would show up and work, and when their assistant winemaker left, they hired me for the position,” Woodley said.

She was there until 2009, and had been promoted to associate winemaker, until Whitman Cellars ran into financial troubles and closed.

Later, she took harvest assistant winemaker jobs, worked as an enologist at Waterbrook for 1½ years, and put in stints at Otis Kenyon and Canoe Ridge Vineyard, up until two years ago when she began to devote all of her winemaking energies to SuLei. She credits the diverse experience with helping her develop her style and expertise.

“At Waterbrook, I got to learn about large-scale production and work in a lab with excellent equipment. And it was important for me to work with lots of different winemakers, making lots of different styles of wine, sourcing from different vineyards and different coopers.” 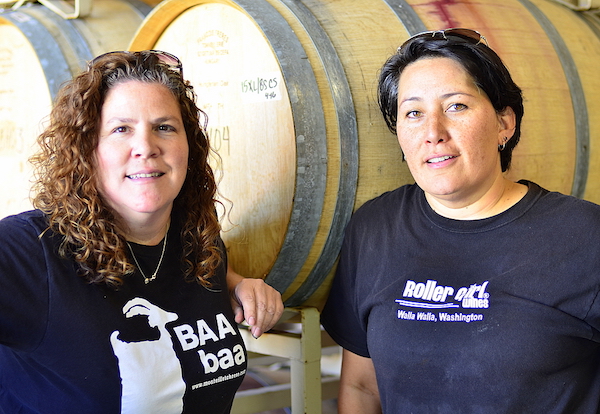 Tanya Woodley, left, and Elaine Jomwe of SuLei Cellars in Walla Walla, Wash. The winery is expanding production and considering a second tasting room. The two use grapes from the Walla Walla and Yakima valleys. (Photo by Abra Bennett/Great Northwest Wine)

For the first seven years of SuLei’s existence, Woodley worked full-time for other wineries, all the while making wines for SuLei. In 2007, grapes for the first SuLei red wine were harvested and made into their Beet Red blend, named for the winery’s location on Beet Road. Woodley jokes about the clients who regularly ask if the wine is made with beets, and threatens to include a statement on the back label that no beets were harmed in the production of this wine.

Their first release in 2009 was of 250 cases. It consisted of the 2007 Beet Red, a Roussanne, and a rosé. Woodley describes working harvest for two wineries simultaneously as exhausting.

“I remember specifically one night we started pressing SuLei Roussanne at 6 at night, and we were pressing until 3 the next morning, and we both had to be at work in the morning,” Woodley said. “And it was raining. I kind of liken it to childbirth, at the time it’s so painful and grueling, but then afterward you think, ‘Oh my baby is so beautiful!’ ”

That first Roussanne came from the Zerbas’ Cockburn Ranch Vineyard, and Woodley made it two years in a row, before losing the grapes to a larger producer. In 2008, when she was looking around for another source for white grapes, and specifically for Albariño, Marie-Eve Gilla of Forgeron Cellars suggested that she contact Crawford Vineyard.

Owned by Charlie and Connie Crawford, the vineyard sits on the slopes above Prosser, in the Yakima Valley. SuLei has been sourcing grapes from Crawford ever since.

“They really do a great job out there, the management is really focused, and the site has a great ability to ripen the fruit without dropping the acidity,” Woodley said. “Elaine and I both really like acid in our wines. When I make wine I’m always thinking about the foods it will go with, because it’s one of the most beautiful things when you find a good food and wine pairing.”

“I just really enjoy making white wine,” says Woodley. ”It’s obviously a bit more finicky to make, but we use Mother Nature throughout the process. I do tend to pick my whites very bright, then ferment them in stainless steel tanks, with no malolactic fermentation, then age them in very neutral oak for two months to round out the mouth feel. For our reds, we use French, American and Hungarian oak, I love Hungarian oak for its spiciness.” 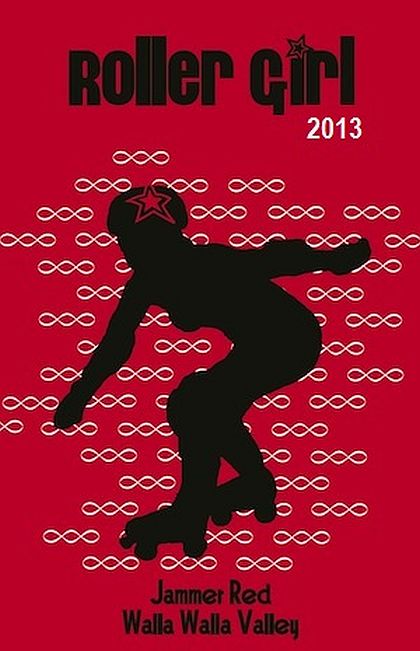 SuLei also has a second label, Roller Girl, in honor of Jomwe and her five years skating with the Walla Walla Sweets Rollergirls. According to Woodley, Roller Girl is intended to be a little larger production with a lower price point and made in a broader style. SuLei is a very specific style, usually single-vineyard, single-varietal wines at a higher price point.

However, that notion is relative, since the range for both labels is $12-$38 a bottle, with several bottles coming in under $20. That’s a real bargain for the crystalline, fresh, perfectly balanced whites Woodley turns out.

“I don’t think you have to break the bank to get a good bottle of wine,” Woodley says.

From its humble 250-case beginning, their production has slowly grown to just more than 1,000 cases produced from the 2015 vintage. This year, they’ll be bumping it up to 1,500 cases.

They’re also on the hunt for a tasting room in Seattle. Progress has been slow and steady, by design, and with good effect. And with Jomwe’s head for business and Woodley’s fine hand with the fruit, the sky is probably the limit for this enterprising couple.