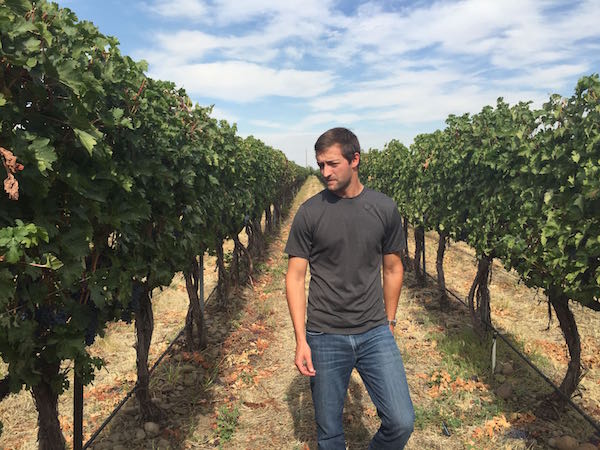 WALLA WALLA, Wash. – For the first eight vintages of Doubleback, Chris Figgins has been the winemaker of record. It’s been a superstar team of the owner of legendary Leonetti Cellar and retired NFL quarterback Drew Bledsoe running Doubleback.

Now the lineup has changed, and Doubleback is charging forward in new directions.

The man behind the scenes at this Walla Walla winery is Josh McDaniels, who has been involved in Doubleback’s winemaking nearly since the first vintage. We recently caught up with him to talk about what it’s like growing up with Chris Figgins and now working for Drew Bledsoe.

From Leonetti to Doubleback 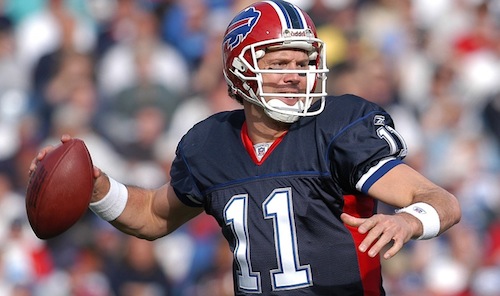 Drew Bledsoe had a prolific NFL career that included a Super Bowl ring with the New England Patriots before playing for the Buffalo Bills and Dallas Cowboys. (Photo via Flickr/click for credit)

McDaniels grew up in Walla Walla, and his dad worked alongside Chris Figgins’ dad – Gary, founding winemaker for Leonetti – at Continental Can. At church, Chris was his youth group leader.

“He took me in at Leonetti,” McDaniels said. “Threw me into the picking crew my first day on the job and really taught me the hard work that went into winemaking. I worked my way up from there.”

Bledsoe, meanwhile, was a somewhat mythical person in Walla Walla. He was a high school football star (whose Walla Walla High School record for yardage was finally bested last weekend) who went on to Washington State University in Pullman, where he had a record-setting career. In 1993, he was the No. 1 pick in the NFL draft, going to the New England Patriots (the Seahawks had the No. 2 pick that year and drafted Notre Dame quarterback Rick Mirer – who now owns a California winery). He was still on the roster when the team won its first Super Bowl in 2002, and he was selected to the Pro Bowl four times.

After stints with the Buffalo Bills and Dallas Cowboys, Bledsoe retired from the NFL, wrapping up a career that was impressive if not quite worthy of the Pro Football Hall of Fame. Then he returned to his roots, doubling back, if you will, to Eastern Washington, where the wine industry in his hometown had taken off while he’d been flinging a pigskin around the East Coast for the prior 14 years.

In 2007, he teamed up with his old pal Chris Figgins to create Doubleback, quickly gaining acclaim for his Cabernet Sauvignon – landing on the Wine Spectator Top 100 list. He and his wife, Maura, live in Bend, Ore., where he is the quarterback coach for his son’s high school football team.

Bledsoe owns two estate vineyards, both in the important SeVein development near Milton-Freewater, Ore. His McQueen Vineyard was the first planted there, and his Bob Healy Vineyard is named after his late father-in-law, a man who purportedly enjoyed drinking inexpensive wines and argued with Drew about the merits of high-priced Cabs. Ironically, the vineyard that bears his name produces grapes for high-end reds.

Doubleback on its own 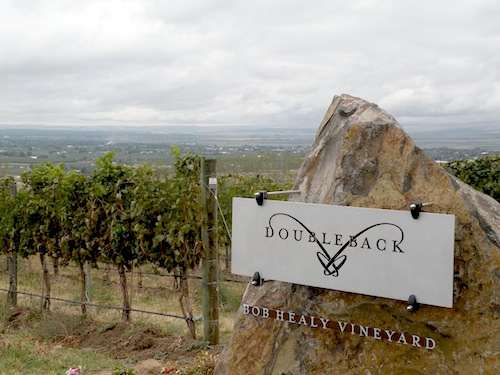 Retired NFL and WSU football star Drew Bledsoe owns two vineyards in SeVein that is part of his Doubleback winery. This vineyard, Bob Healy, is named after his father-in-law. (Photo by Andy Perdue/Great Northwest Wine)

For the first eight vintages of Doubleback, the wines were closely tied to Figgins, who was the winery’s consulting winemaker. That’s all changed now. With the maturity of the brand came the need for it to have its own identity.

“The plan was always for me to take over for Chris,” McDaniels said. “It was a really easy, natural transition for both companies. We’re all friends still.”

Today, Doubleback has its own downtown tasting room, a great space just a few blocks up Main Street from the main downtown core of tasting rooms. Anyone expecting to walk in and find Bledsoe behind the tasting bar pouring wines will typically be disappointed.

“Drew’s on the road a lot,” McDaniels said. “He’s in Walla Walla once or twice a month.”

He does enjoy working the tasting room on occasion, said McDaniels, who also is Doubleback’s general manager.

“He enjoys doing that kind of stuff, meeting our customers and sharing our wines with them.”

Someone coming in to meet a retired NFL quarterback often will leave with a few bottles of Cabernet Sauvignon.

“I understand that as a football fan myself,” McDaniels said, adding that he was intimidated the first time he met Bledsoe. “I like it when they leave as fans of our wines.”

Because of his position in sports and as a regional celebrity, Bledsoe is able to carry the message of Walla Walla Valley wine in a different way, and that’s good for the entire industry, McDaniels said.

“Walla Walla is Drew’s hometown,” McDaniels said. “While in the NFL, he found a love for wine and saw with his hometown was doing, came back and had and opportunity to make great wine, enhance what was going on and play his part. It’s been a dream for him and another avenue for him to exploit his competitive nature and business acumen.”

What’s next for Doubleback 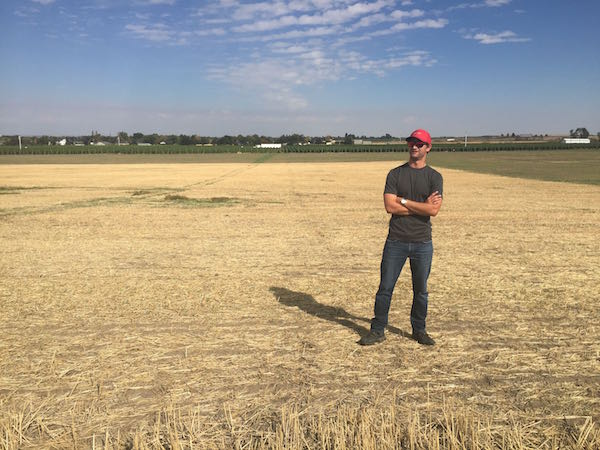 Josh McDaniels stands in a former wheat field that will be the future home for Doubleback. The site will include a production facility, underground caves and an estate vineyard. (Photo by Andy Perdue/Great Northwest Wine)

The primary focus for Doubleback has been Cabernet Sauvignon – what McDaniels describes as “the feminine, Old World” side of the classic Bordeaux grape. He brings in grapes not only from the two estate vineyards in SeVein, but also a contracted vineyard in The Rocks District of Milton-Freewater.

Under his Drew Bledsoe Signature Series bottlings, McDaniels has the opportunity to branch beyond Cab, with Syrah, Chardonnay and even a dry rosé.

“That allowed us to be creative and do some different wines and wine styles,” McDaniels said.

Now Bledsoe is building his own winemaking facility south of downtown in a former wheat field. The facility will include a tasting room, underground caves for aging wine and more estate grapes.

“We’re extremely excited to have our team under one roof and bring our customers out to the production facility,” McDaniels said. “We really want to create a portfolio of vineyards. We’re super excited about that.”

For Bledsoe, it’s about building a business and a life after the NFL.

“Growing up here, Drew’s a local legend,” McDaniels said. “I’ve been impressed by who he is as a person outside of sports – and everything I’ve worked with him on has really been impressive.”