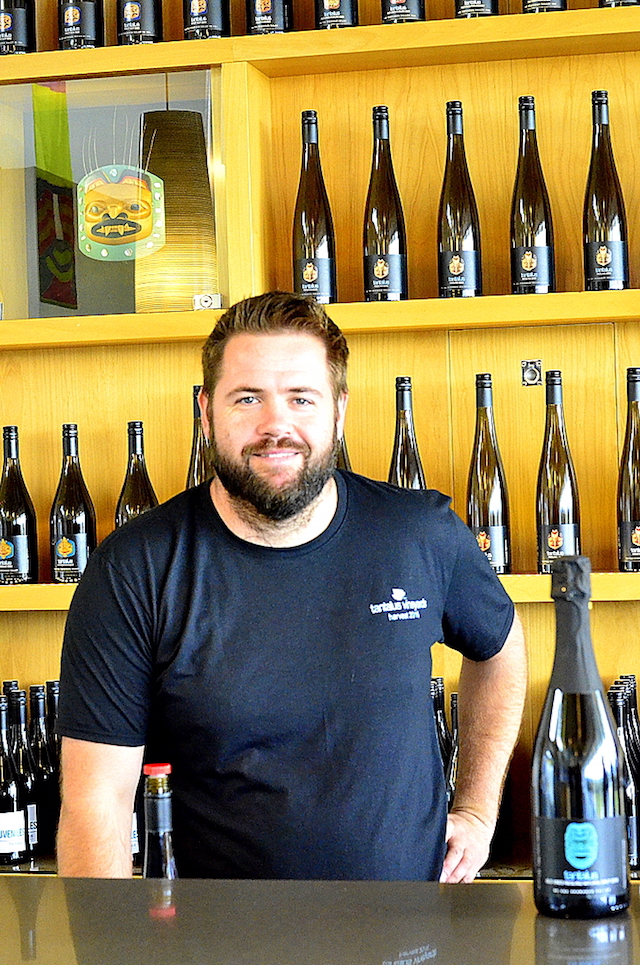 Tanatalus Vineyards winemaker David Paterson was born in Vancouver, British Columbia, but he grew up in New Zealand and returned to Canada after graduating from Lincoln University with a background in viticulture and enology. (Photo by Abra Bennett/Great Northwest Wine)

KELOWNA, British Columbia – Many people say that good wine is made in the vineyard, not in the cellar. But when David Paterson, general manager and winemaker of Tantalus Vineyards in Kelowna, British Columbia says it, it’s with a passion that lets you know he really means it.

Paterson, who came to Tantalus in 2009, was born in Vancouver B.C. but grew up in New Zealand. He graduated from New Zealand’s Lincoln University, in the viticulture and enology program.

“I studied in New Zealand, but I don’t think that you learn winemaking at university,” he says. “I think you learn on the job. I’ve worked in New Zealand, Australia, the States, Burgundy, down through Italy, at smaller boutique wineries — learning under the best winemakers that would take me on. I often volunteered, at the top spots.”

He counts among his winemaking mentors Stephen Henschke of Australia’s Henschke winery, and John Kavanagh of Neudorf Vineyard in New Zealand. From these two illustrious winemakers he learned a strict ethic about how to grow grapes and make wine, one that informs his winemaking to this day.

Organic is the watchword 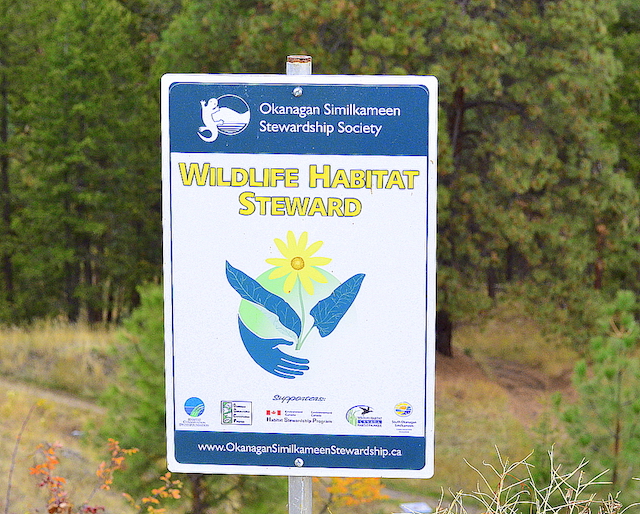 Tantalus Vineyards in Kelowna, British Columbia, is home to 54 beehives and a 10-acre forest. Neither David Paterson nor his team has applied herbicides or pesticides since 2007. (Photo by Abra Bennett/Great Northwest Wine)

At Tantalus, they grow grapes organically, although they are not certified as organic. According to Paterson, they haven’t used any sort of insecticide or herbicide on the property since 2007.

“But if we needed to, in the face of some sort of pestilence, I would use a bit of science to save the crop,” he says emphatically. “I’m not going to lose a bunch of fruit just for the sake of being organic. I grow organically because I feel that it makes better grapes, and better wine, and not because I think I need to put it on the label.”

In keeping with the biodynamic growing techniques he learned from Henschke, he tends to feed his vines with fish fertilizer, kelp extract and organic compost, although for vines he deems weak he sometimes adds in a bit of inorganic salts to give them a nutritional boost.

He also maintains, as part of the Tantalus property, a 10-acre forest that has been left to grow completely naturally. In addition, Tantalus is home to 54 beehives. Paterson explains that bees aren’t important for grapes, which are self-pollinating, but they are important pollinators for most of the other species around the vineyard.

“When you have a healthy bee population you usually have healthy populations of other insects as well and the idea is that nothing ever really gets out of whack. So if we have leafhoppers or an erineum mite outbreak, we don’t have to hit it with a bunch of chemicals because there’s a really biodiverse environment – and there’s always a predator there to take care of the other pests.

“And,” he continues, “that’s why we plant cover crops in the vineyard that are really bee-friendly, really insect-friendly. All the bushes, and everything around the winery, is planted to be bee-friendly and to flower at different times. I like to see my grapes come in to the winery covered with a lot of earwigs and spiders. It’s all part of the terroir!”

90 years of grape life in vineyard 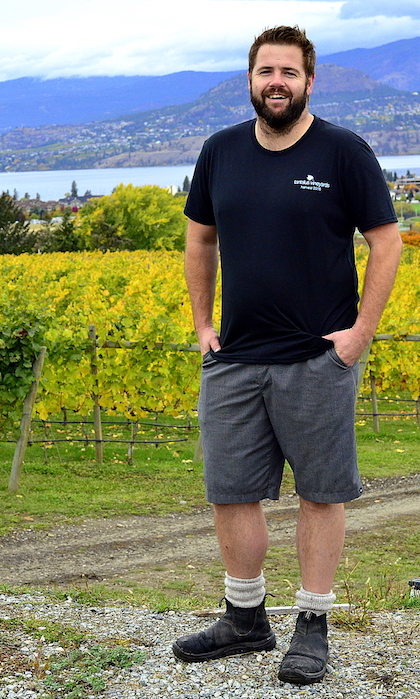 It’s not only the insects but also the soil that contributes to terroir. The geology of the hillside above Kelowna where Tantalus is perched is distinctive, consisting of granite-based glacial till, yielding a fine, talc-like soil.

Table grapes were first planted on the site in 1927, making it one of the oldest, if not the oldest, continuously operated vineyards in the Okanagan. As in the rest of the region, vineyards growing table grapes were later replanted with French hybrids in order to make wine, because at the time it was thought that the area was too cold to plant vinifera vines. The region gets frigid winters, sometimes dropping to -4°F. With the wind chill factor, it can reach a sustained -15° for a week. Wind chill doesn’t affect the vines, but can be quite hard on those who tend them.

However, in the mid to late 1970s, growers began successfully planting some varieties of vinifera, and today most of the vines in the Okanagan are vinifera.

Another Tantalus trademark is avoiding a lush leaf canopy on the vines, because Paterson comes from the school that believes in making vines suffer a bit.

“We run a really lean canopy, because I want the vines to really struggle at the end,” he explains. “I want them to really push all of their energy into their reproductive structures, which are the grapes.”

The weather gods smiled on the Okanagan in 2016. In Paterson’s view, the year saw absolutely perfect growing conditions, with early heat that leveled off and stayed not too blazing hot all through the growing season. And lest you think that Canada doesn’t get hot, he mentions that lately in summer they’ve been seeing temperatures around 104° Fahrenheit.

“This is my eighth harvest on this property and I’m quietly thinking it’s the best so far,” he said. “We had a little more rain than usual, so there was a little more disease pressure, but nothing insane. And we had nice cool nights, so we had the luxury of letting the fruit hang for an extra few weeks, giving us potentially great flavors balanced with alcohol that’s not too high.” 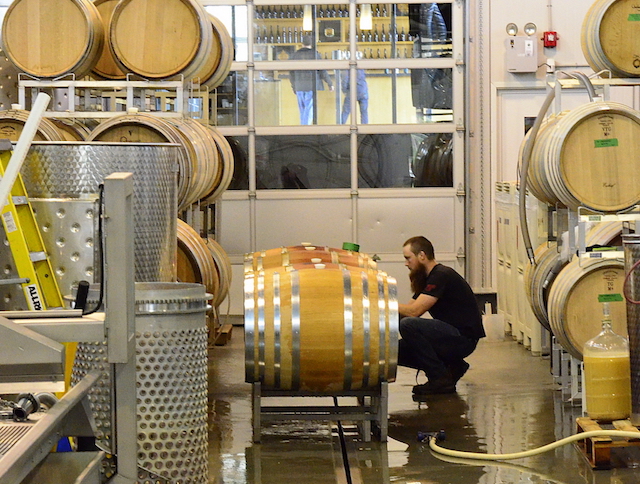 Although Tantalus wines are “made in the vineyard,” a winery is still necessary. They started construction on the winery building in 2009 and finished it in time for spring release in 2010. Made with green materials and techniques, it’s British Columbia’s first LEED-certified winery.

There are no concrete eggs or trendy gadgets found here. Paterson adheres to the credo that the only thing that matters in the wine is good vineyards and good fruit, not whether you make your wine in concrete or wood.

In fact, he’s somewhat of an iconoclast on the subject.

“I’ve tasted many examples where the winemakers said ‘here’s the wine made in concrete, and here’s the one made in stainless, and one from the puncheon, and it’s all the same fruit, and see how different they are?’

“And I have to answer no, not really! I just find the whole concrete egg thing to be a bit of Alice in Wonderland stuff,” he adds. “The magic comes from the vineyard. If you’ve done your job in the vineyard and you’ve got great grapes, it doesn’t matter what you make your wine in or what winemaking techniques you use, so long as you understand the science.”

He does, however, limit his barrel program to French oak, as he feels that American oak isn’t suited to the bright, high acidity wines produced in his vineyards.

“I never want the first impression of a wine that I make to be of the barrels that it’s been in,” he stresses.

Emphasizing the importance of understanding fermentation science, he adds “I don’t rely on a lot of numbers in winemaking, I can mainly do it by taste and smell, but if something’s going awry and I do run the wine through labs, I’ve got to be able to understand what the numbers mean.”

Paterson is a believer in native fermentation without added yeast, and whole cluster pressing, and then, minimal intervention. Describing himself as a purist, he says that the winemaker’s job is to get out of the way of good fruit.

His approach to winemaking? “In winemaking you have to have the nerve to not do much. Winemakers convince themselves that by tinkering and fiddling they’re making great wine. But all the best wines I’ve ever tasted or made have been made very simply using great fruit.”

Although he walks the artist’s walk, he talks the scientist’s talk.

“You can only be an artist if you understand the science,” he says. “If you don’t, and your winemaking is just airy-fairy, your wines will always turn out weird. You have to be able to taste and think like a scientist but have the sense to leave the wine alone sometimes.”

Tantalus produces 8,000 to 10,000 cases annually, depending on the vintage, which meant that in 2016 about 160 tons of estate fruit passed through the winery. Paterson releases Chardonnay, Pinot Noir, and both still and sparkling Rieslings, as well as an icewine from Syrah.

Paterson believes that Tantalus is also the only winery in the world to make an icewine from Syrah every year. He likes to surprise guests by opening winemaker’s dinners with it, served with a little blue cheese and charcuterie, saying that it’s a great pairing due to the high acid level of the wine, balancing its inherent sweetness.

With his somewhat unconventional views, does he consider himself to be an outlier?

“I would say that here in the Okanagan there’s a group of 20-30 winemakers that think like me,” he says, naming some of his favorites. “CedarCreek, Kitsch Wines, Okanagan Crush Pad Winery, Laughing Stock Vineyards, Blue Mountain, Meyer Family Vineyards, Synchromesh Wines, Le Vieux Pin, we’re all doing similar things. The commonality between all of us is that we spend more time in the vineyard than we do in the winery.”

And yet, many of those wines, including Tantalus’ own, never see the light of competition.

“We almost never enter competitions,” he says. “The wines that win are made to be showy, with the amount of oak they put on it. And when you’ve got many different palates in a judging, what comes to the top is the middle of the road.

“We don’t make middle of the road wines, we make austere, mineral-driven wines,” he continues. ”I’ve judged many competitions, more than I’ve entered. And when you judge you get one snapshot at that wine, and a quiet wine, like ours that are made for aging, really don’t get pushed forward. But there’s no point in making wines that are overblown from the start, they’re giving everything up at once, they’ve got nowhere to go.”

“I look at Chateau Ste. Michelle as an example that proves you can make excellent wines on a huge scale, and if you buy any of their bottles that’s over $20, you know that wine has had special attention. In the Riesling vineyards, their practices are very similar to what we’re doing here, even though they’re making 1.3 million cases of Riesling alone. So it can be done,” he concedes.

For Paterson, the bottom line is clear.

“I want my wines to still have life, to still be part of nature,” he said. “When you taste wines that are vineyard-focused, and not winemaker-focused, there’s a special life and energy to them, and that’s how wine should be.”