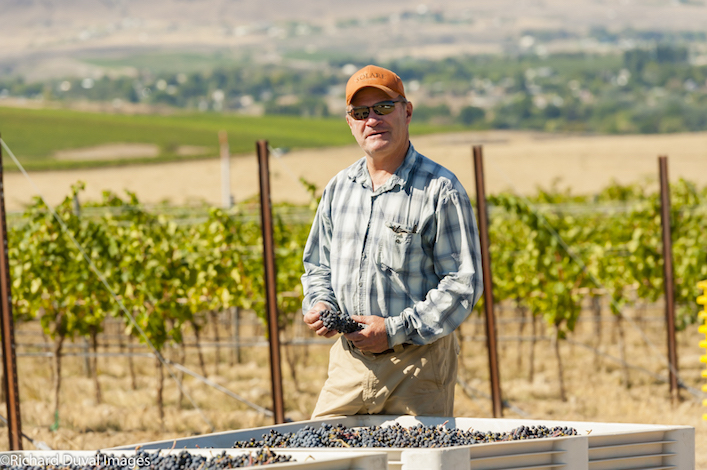 Dick Boushey oversees harvest of Cara Mia Vineyard on Red Mountain. He was named the Washington State Wine Commission’s Grower of the Year in 2002 and Grower of the Year by Wine & Spirits magazine in 2007. (Photo by Richard Duval Images)

Leading the way was Cabernet Sauvignon, which weighed in at 62,200 tons. The noble red variety has led the way in Washington for the past three years, and continues to, but appears to have reached its zenith.

Growers across the state pointed to last year’s harsh winter as one reason for the lower crop size.

Wade Wolfe, owner/winemaker of Thurston Wolfe Winery in Prosser, heard of temperatures reaching as low as minus-14 in areas, damaging buds and reducing not only the number of clusters but also the size.

Dick Boushey, who farms his vineyard in the Yakima Valley, as well as several on Red Mountain, pointed out the wet winter and spring also led to mildew pressure, damaging mostly white varieties. He observed this to be a widespread problem.

He also pointed out with the record size of the 2016 vintage that many wineries have the inventory to cover  most shortfalls.

Riesling fell to 33,000 tons from 41,300. This is widely viewed as a market correction by Chateau Ste. Michelle, the world’s largest Riesling producer.

Kevin Corliss, vice president of vineyards for Ste Michelle, said upwards of 200 acres of Riesling got grafted to different varieties, and some fruit was lost to mildew. He said one Riesling vineyard was pulled out because it wasn’t planted in a less-than-optimal spot. He said this is a reflection of the marketplace, and he feels the tonnage is more in balance with marketplace projections.

Wolfe said he is pleased with the quality of his 2017 wines so far. Even with the smaller crop, he had no issues getting all the fruit he needed.

Boushey said his client winemakers are thrilled with the quality and balance of their wines.

“I think I picked some of my best fruit ever last fall,” he said.