For the second straight year, the Auction of Washington Wines topped $4 million in fundraising to Seattle Children’s Hospital and Washington State University’s viticulture and enology program.

Chateau Ste. Michelle in Woodinville continues to serve as home to the crowning Gala for the Auction of Washington Wines, and the money shot from the Aug. 20 festivities shows the total of $4,073,129 in the background. Last year’s total came in at $4.19 million. Organizers established a goal of $3.6 million for 2018, making Shelley Tomberg’s first full year as the auction’s executive director a successful one.

Wine Spectator magazine ranks it among the top five charity wine auctions in the United States, and research by the Puget Sound Business Journal indicates the Auction of Washington Wines has grown into the fourth-largest charity event in the greater Seattle area.

In the 31-year history of the event developed by Allen Shoup, a member of the Washington Wine Hall of Fame and former CEO of Ste. Michelle Wine Estates, the Auction of Washington Wines has raised more than $45 million for Seattle Children’s Hospital and wine research at WSU. 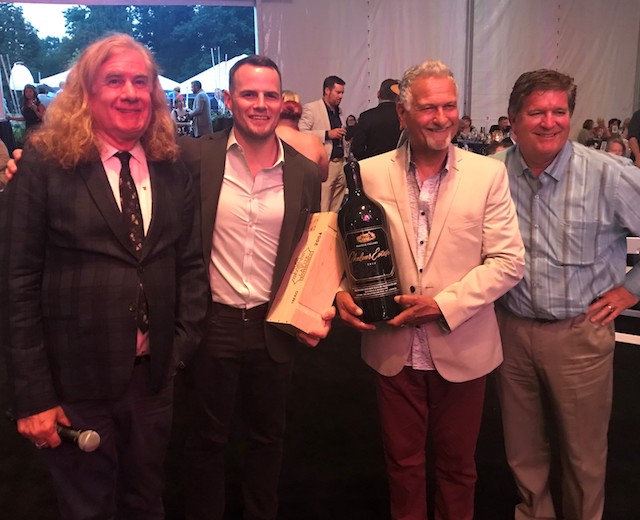 DeLille Cellars, one of Washington’s most decorated wineries, created a winemaker-led tour of Bordeaux for three couples that went for $160,000. That made it the most expensive single-selling lot in the Auction of Washington Wines history.

“The tour we have developed is beyond anything I imagined when we first came up with the idea for a trip to Bordeaux,” DeLille founding winemaker Chris Upchurch stated in a news release. “We have worked closely with our French connections to create a world-class ‘insiders’ experience. I’m looking forward to hosting our generous guests next summer, and the best part about it will be knowing we raised an amazing amount of money for the Auction of Washington Wines.”

Visits to Chateaux Haut-Brion, La Mission Haut-Brion and Chateau Lafite Rothschild will be led by Upchurch, his wife Thea, chef Jason Wilson and his wife Nicole. Each evening, Wilson, culinary director for Fire & Vine Hospitality, will prepare dinner. Winners of the auction lot were Tom Sweeney and Rod and Kim Stohler.

DeLille CEO Tom Dugan said, “We couldn’t have done this without the generosity of our chateau and cooperage partners in France, as well as our owners, including Sam Bronfman. This will be a once-in-a-lifetime experience for the winners.”

This year, DeLille Cellars generated more than $185,000 for the Auction of Washington Wines through lots that it provided to the Gala, the Winemaker Picnic & Barrel Auction and the record-setting Private Barrel Auction. 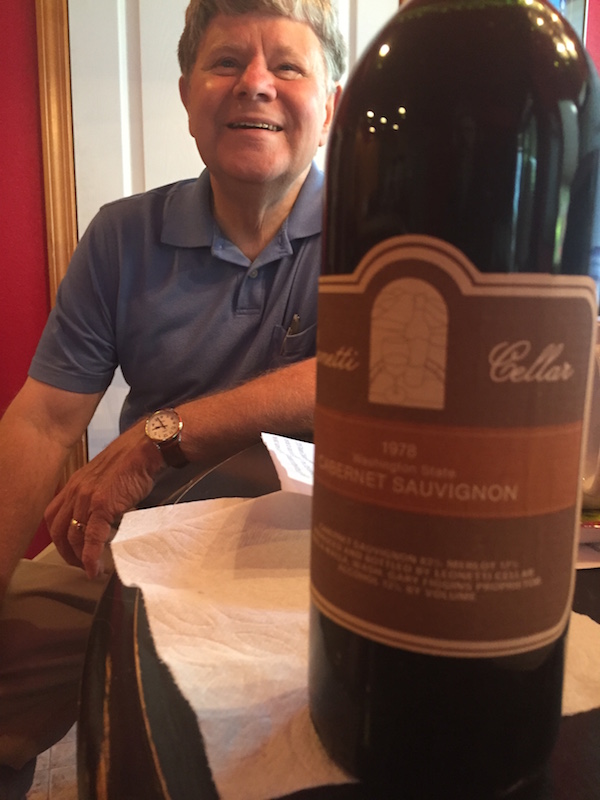 Hank Sauer and his wife, Nancy, have raised $62,500 for the Auction of Washington Wines during the past two years through their donations of historic vertical lots made by famed Leonetti Cellar in Walla Walla. (Photo by Andy Perdue/Great Northwest Wine)

Among the highlights was another Leonetti Cellar auction lot donated by retired Kennewick educators Hank and Nancy Sauer, a pair of WSU graduates. Last year, their 37-bottle collection of Leonetti Cab went for $32,500. This year, their 36-year vertical of Merlot made by the Figgins family went for $30,000. As new releases, five of those Merlots by founding winemaker Gary Figgins ranked among Wine Spectator magazine’s Top 100 wines of the world in the late 1980s and early 1990s.

And Lot 13 featured time in Quintessence Vineyards and Fidelitas on Red Mountain, a three-visit experience to create a barrel of wine with winemaker Charlie Hoppes, this year’s honorary vintner, and viticulturist Marshall Edwards, the 2018 honorary grower. 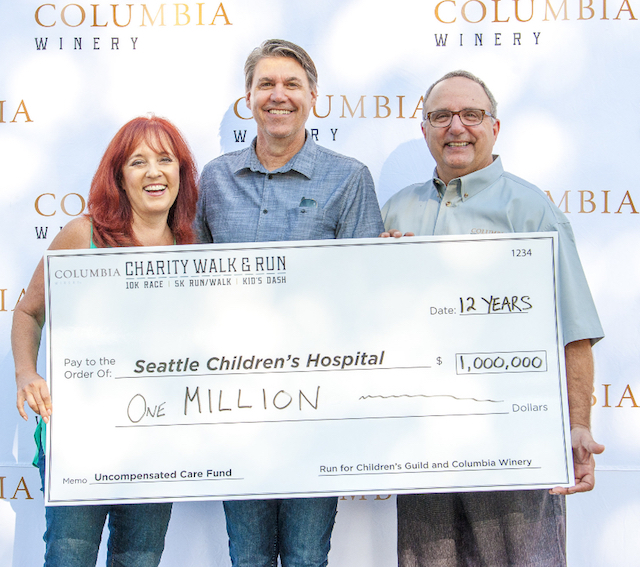 E. & J. Gallo’s involvement in the Auction of Washington Wines began not long after the California giant purchased Columbia Winery and Covey Run wineries from Ascentia Wine Estates in 2012.

So what started as the Covey Run is now the Columbia Winery Charity Walk & Run. On Saturday morning, Aug. 18, the 10K-, 5K-run and kids dash raised more than $100,000, which allowed the 12-year-old event to surpass $1 million in fundraising for autism, cancer clinical trials and uncompensated care at Seattle Children’s Hospital.

“Our goal is to provide uncompensated care that ensures families are never in the position to decide if they can afford a child’s medical treatment,” said Aileen Kelly, executive director of the Seattle Children’s Hospital Guild Association. “Columbia Winery has been an essential partner in meeting this ever-growing need, and the funds raised from thousands of generous participants in this annual event truly make a difference in these children’s lives.”

The 2019 Auction of Washington Wines will be staged Aug. 15-17. Major sponsors include Chateau Ste. Michelle, The Seattle Times, KING-5 TV and Wine Spectator.