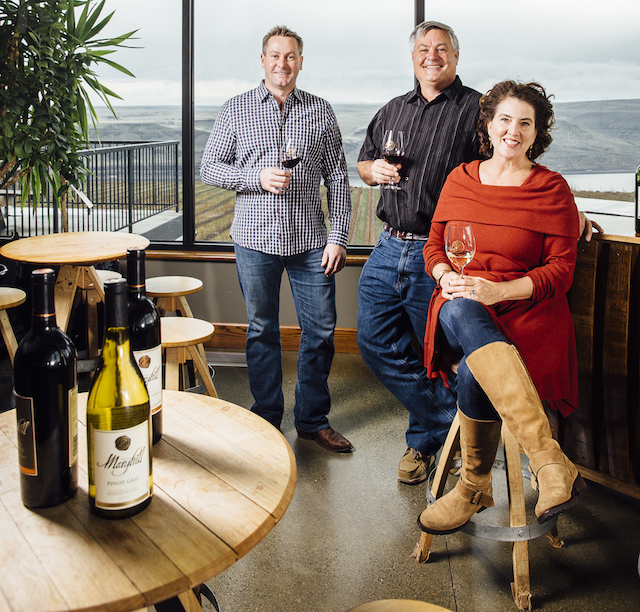 Richard Batchelor, left, produces 80,000 cases of wine for Maryhill Winery co-owners Craig and Vicki Leuthold. They are scheduled to open their Vancouver, Wash., tasting room on April 13 and then another in Woodinville’s Hollywood District during the fourth quarter of 2019. (Photo by Ashley Anderson/Courtesy of Maryhill Winery)

VANCOUVER, Wash. – By the end of the 2019, no producer in Washington state will operate more tasting rooms than critically acclaimed Maryhill Winery and owners Craig and Vicki Leuthold.

The Leutholds are poised to unveil their Vancouver, Wash., tasting room on Saturday, April 13, a nearly 5,000-square-foot retail space and outdoor patio near Grant Street Pier to showcase the wines by award-winning Richard Batchelor. It will become a wine-themed centerpiece for the $1.5 billion development project along the Columbia River known as The Waterfront-Vancouver USA.

And as Maryhill Winery celebrates its 20th anniversary this year, the Leutholds are on track to join the vibrant wine scene of Woodinville by moving into the historic Hollywood Schoolhouse late in the fall or early winter, Great Northwest Wine has learned. That will give the Leutholds four tasting rooms throughout the Evergreen State, complementing their flagship winery on the eastern edge of the Columbia Gorge and the young Kendall Yards tasting gallery they opened November 2017 in their hometown of Spokane.

“There were only 125 wineries in Washington when we started,” Craig Leuthold told Great Northwest Wine. “We’re knocking on the door of 1,000 wineries, and it really is a testament to the quality of fruit grown in Washington.”

Maryhill Winery of Goldendale, Wash., will open a satellite tasting room April 13 at Grand Street Pier, the centerpiece of the $1.5 billion The Waterfront Vancouver USA project. (Photo by Gramor Development, Inc./Courtesy of R\West)

The Waterfront-Vancouver USA project, a public-private partnership between the City of Vancouver and Gramor Development, Inc., spans 32 acres just downstream from the Interstate 5 Bridge. A former lumber mill and shipyard, it will be transformed into a 20-block urban development with 10 acres set aside for Vancouver Waterfront Park.

Plans include 3,300 residential units, 250,000 square feet of retail space for restaurants and shops, and 1 million square feet of commercial office space. Among the participating restaurants will be WildFin American Grill and Twigs Bistro & Martini Bar. Maryhill will be in Block 12 with Twigs, a Northwest-based group that includes four Spokane restaurants.

“With the expansion of our tasting rooms into other key markets in Washington and the Portland-Vancouver metro, we are focused more than ever on making our high-quality, approachable wines accessible to more people,” Leuthold stated in a news release. “This is a big step for us, but one we have been planning for the past year. We’re excited to bring our immersive tasting room experience to more customers across the state.”

Maryhill will become one of a handful of wineries pouring in downtown Vancouver, but Batchelor’s program is in a different class in terms of production – 80,000 cases – and backed by a decade-long string of accolades. Among the most recent is the 2018 Winemaker of the Year trophy from the prestigious Indy International Wine Competition at Purdue University.

Striking billboards touting that award command the attention of anyone driving in Oregon along the Columbia Gorge. Success is reflected each year in the 75,000 visitors to the Goldendale tasting room, which is a destination, but Batchelor remains a linchpin to the winery’s success. The Leutholds say they have structured his contract accordingly. 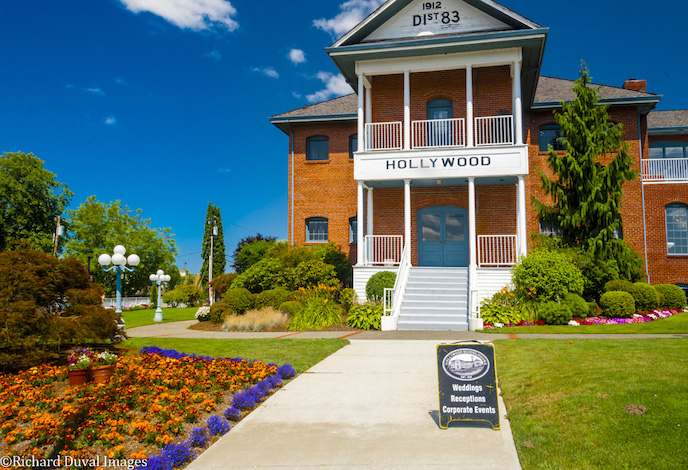 This fall, Maryhill Winery plans to open its first tasting room in the Puget Sound area when it moves into the Hollywood Schoolhouse, a Washington State Historical Monument.

The Leutholds will lease 10,000 square feet – the top two floors of the brick building constructed in 1912 for school district No. 83. It has been owned since 1977 by James and Rosemary McAuliffe, a longtime politican from Bothell. Maryhill will continue to offer the first-floor ballroom for event rentals, a business supported by a full commercial kitchen. Wine club members will be granted access to the atrium and museum on the second floor. In the meantime, popular Alexandria Nicole Cellars will continue to operate its tasting room and wine club on the lower level.

Their foray into Woodinville will become the Leutholds’s first tasting room without a view of a river, although the Sammamish River is just a few hundred yards away. The planning, logistics and staffing that comes with doubling their tasting room presence across Washington contributed to the Leutholds’ emotional decision to step away from the concert business. At this point, they are undecided on the future of their 4,000-seat amphitheater and its stage.

“We are looking forward to becoming the new stewards of this iconic landmark,” Leuthold said. “The Hollywood Schoolhouse, like Maryhill, is a family-owned business with deep roots in the community. And the location is just as breathtaking as our other Washington tasting rooms. It’s the ideal venue for reaching a new audience of wine lovers in the Seattle area.” 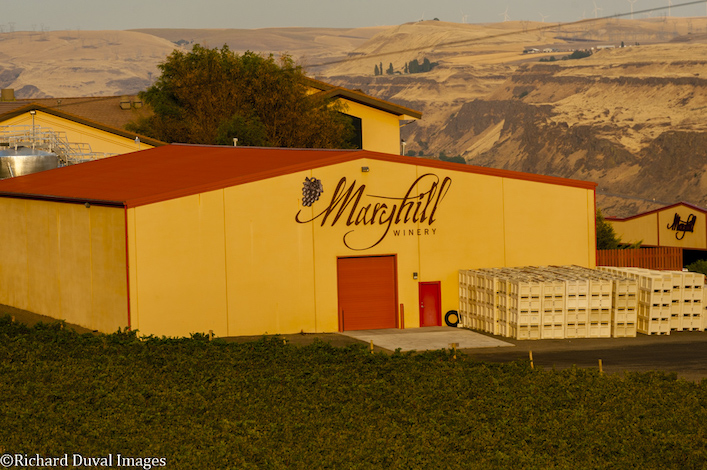 Maryhill Winery, which produces 80,000 cases, became bonded in 1999 along the eastern edge of the Columbia Gorge near the town of Goldendale, Wash. (Richard Duval Images)

Meanwhile, the Leutholds continue to secure long-term contracts with their favorite vineyards and growers. Maryhill works with 35 varieties to make as many as 65 wines, sourcing from 12 winegrowers and two dozen of Washington’s top vineyards.

Along the way, Craig Leuthold has developed a market for Viognier. No one in Washington, not even Ste. Michelle Wine Estates, produces more Viognier than Batchelor and production winemaker Dirk Richardson.

“We like showcasing more obscure varietals at Maryhill, and we’re all about education and expanding consumers’ palates and offering something they’ve never tried before,” Leuthold said.

While he’s bullish on the continued thirst for rosé, his new passion is undoubtedly the Spanish white grape Albariño.

“It’s my favorite white wine ever made and maybe my favorite of all time,” Leuthold said. “It’s so rich and complex — like a red in white clothing — and it’s perfect with the Spanish tapas restaurants that have sprung up. Our current production is at a little more than 1,000 cases, and we’re looking at another 10 acres.”

That would triple their work with Albariño as Maryhill’s contracts with nearly 400 acres of vineyards leave the door open to more exploration and expansion.

“Before this, I sold plastics raw materials for a Fortune 200 company, and that business helped introduce me to the wine business,” Craig Leuthold said. “My territory included Walla Walla, and I would stop in tasting rooms at Woodward Canyon, L’Ecole, Waterbrook and Leonetti, back when it had a tasting room open to the public.”