Harvest on Washington’s Red Mountain can only be described as fast and furious this week, as grape growers and winemakers race to stay ahead of rising sugars and a storm that threatened the region Wednesday evening.

Charlie Hoppes, owner and winemaker at Fidelitas Wines on Red Mountain, brought in 15 tons of red grapes and 9 tons of white grapes Wednesday, which came on top of 12 tons of Merlot he harvested Tuesday.

Hoppes, who makes his wine at his production facility in nearby Richland, was concerned not only about the rising sugar levels he saw in Cabernet Sauvignon and Merlot, but also with an early evening thunderstorm that was heading west toward Red Mountain from the Walla Walla Valley.

“We just picked another block just in case we get rain,” Hoppes said as he stood in Quintessence Vineyards on the southern end of Washington’s smallest appellation.

Somewhat astonishingly, Hoppes was bringing in the normally late-ripening Cabernet Sauvignon from Red Mountain. Granted, it was from 4-year-old vines at Quintessence – the vines’ youth tend to skew the maturity dates a bit, he said. Even so, he’s a solid two weeks ahead of last year’s more normal temperatures.

Picking this early is not unprecedented, Hoppes said, noting he saw grapes coming from Wahluke Slope vineyards this early in 1994, when he was the red winemaker at Chateau Ste. Michelle.

Red Mountain could be mostly picked by Oct. 1 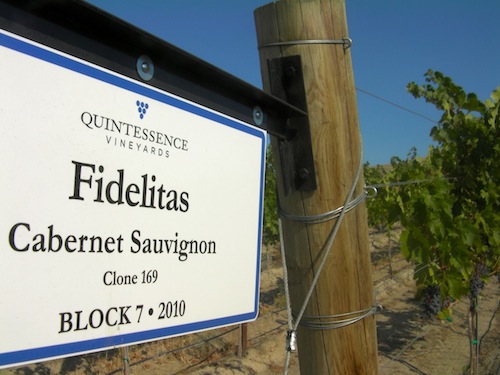 Quintessence Vineyards on the southern end of Red Mountain grows Cabernet Sauvignon for Fidelitas Wines. It was picking Cab for Fidelitas on Wednesday. (Photo by Andy Perdue/Great Northwest Wine)

Hoppes predicted that nearly all grapes will be harvested from Red Mountain’s 1,400 acres of vines by Oct. 1.

Ryan Johnson, vineyard manager for famed Ciel du Cheval and Force Majeure, didn’t disagree with Hoppes’ assessment, adding that some late varieties such as Mourvèdre will probably hang into October.

On Wednesday, he was picking Merlot for Walla Walla producers Tamarack Cellars and Seven Hills Winery.

“We’re pretty maxed out on what we can pick each day,” Johnson said. “If we don’t get rain, Ciel will be close to 20 percent picked by the end of this week. We’ve never been this active this early in September.”

Johnson said Cabernet Sauvignon on Force Majeure was at just over 22 brix.

“That’s a darn good place to be,” he said. “It’s always a concern when sugars race out ahead of physiological ripeness.” 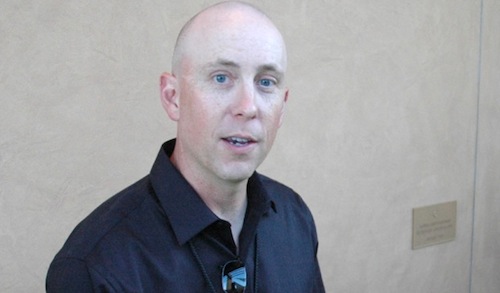 Ryan Johnson is the vineyard manager for Ciel du Cheval Vineyard on Red Mountain. He said his grapes are being picked at a fast pace. (Photo by Andy Perdue/Great Northwest Wine)

Johnson noted that cluster weights are down a bit, primarily because of the oppressive heat the Columbia Valley has experienced all summer. He said he purposely left a healthy canopy of leaves on the vines this year to protect the grapes from the constant sun, a strategy he believes had a moderating effect on his fruit.

“I saw the way this whole vintage was going,” he told Great Northwest Wine. “So we hung a larger crop. And frankly, we’re getting better flavors from the heavier crop.”

Vines he thinned more heavily had sugars shoot up a bit faster, LaLonde said, resulting in grapes that were less balanced.

LaLonde said Red Heaven – a vineyard fairly high up the slopes of Red Mountain – could be mostly picked out within two weeks, including Merlot, Cabernet Sauvignon, Syrah, Tempranillo and even Grenache. He believes such varieties as Mourvèdre, Counoise and some Portugese grapes will likely stay on the vines into October.

On Wednesday, he picked five tons of Merlot for Barnard Griffin. It was from a block he’d thought might need a bit more time and perhaps even some fruit thinning, but when he gave it a closer look, everything was close to perfect.