Jim Holmes is owner of Ciel du Cheval Vineyard on Red Mountain. He said his vines have come through winter and spring in great shape. (Photo by Andy Perdue/Great Northwest Wine)

So far, Mother Nature has smiled kindly on Washington wine grape growers during the 2014 season.

With Mother’s Day being the traditional end of frost season, grape growers across the vast Columbia Valley said they sailed through without issue.

“We are set up for success,” said Jim Holmes, owner of Ciel du Cheval on Red Mountain. “We’re feeling great, and everything is on track.”

Paul Champoux, owner of Champoux Vineyards in the Horse Heaven Hills, said he turned on his wind machines twice the entire spring, when temperatures dropped to about 30 degrees.

“Everything looks fantastic,” he told Great Northwest Wine. “Springtime has been a cakewalk. Thank you, Mother Nature.”

Champoux said his vineyard looks as good as it has in years. This year will yield the first crop from his replanted Circle Block, a section of Cabernet Sauvignon grapes so severely damaged by a winter freeze in late 2010 that he had to replant it.

“We’ll shoot for 2 tons to the acre,” he said. “We’ve been focused on the root system, so everything is well established.”

This year, his winery partners will take all the grapes from the newly planted block, which includes a variety of clones of Cabernet Sauvignon. Champoux’s partners include Andrew Will, Woodward Canyon Winery, Powers Winery and Quilceda Creek Vintners.

Champoux’s cousin, Roger Gamache, grows grapes near the town of Basin City in the Columbia Valley north of Pasco, and he reported no damage to speak of.

Gamache, who owns Gamache Vintners with his brother, Bob, said he had to hunt around for any damage to his peaches and nectarines, which are much more susceptible to spring frost damage than wine grapes. He turned on his fans for two days during the spring because of temperatures that dropped into the mid-30s.

“Mother Nature is in charge, but I have a gut feeling that we’ll have as good a season as last year,” he said. “All indicators this spring sure show that.” 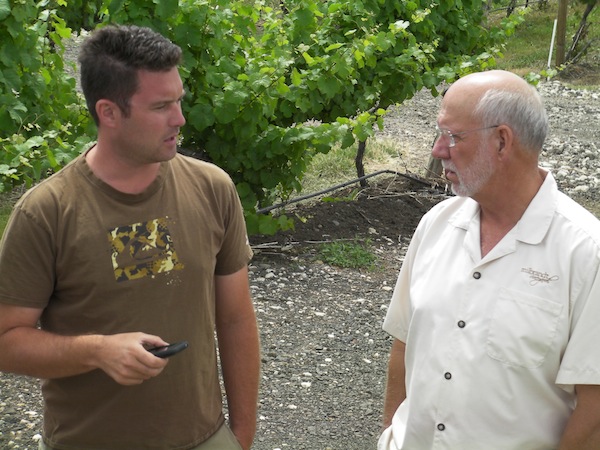 Next on the calendar is bloom, which occurs in early June. This is when the tiny clusters flower, self-pollinate and form grapes. From there, it’s a race to harvest in September and October.

Gamache said the biggest issue during bloom is soil moisture.

“We don’t want any stress issues going into bloom,” he said. “We have soil probes and shovels, and we use all these tools.”

In the cooler Ancient Lakes of Columbia Valley near the town of Quincy, Ryan Flanagan of Evergreen Vineyard said his vines came through winter and early spring without incident. He reported mild winter bud damage but nothing of consequence.

Flanagan said his vines typically will go into bloom about 10 days later than the warmer Wahluke Slope, and he expects nothing different this season.

“Everything looks smooth,” he said. “The crop moved pretty well through this last weekend. We’re pretty happy with everything.”

In the Walla Walla Valley, Norm McKibben of Pepper Bridge Winery said he heard wind machines running Monday morning in lower parts of the valley. However, he has heard of no damage at the vineyards he works with or owns, including Seven Hills, Les Collines and Pepper Bridge.

“We came through in very good shape,” he said. “Knock on wood, we’re past the danger point.”

He said that at this early point in the season, the 2014 crop looks large – “which means we might spend some money dropping fruit” – a problem he said he can live with.