EAGLE, Idaho — Gary and Martha Cunninghams have little trouble selling 3 Horse Ranch Vineyards wine beyond the borders of Idaho’s Snake River Valley, but they want consumers to know more about their vines, their ranch and their tasting room 30 miles northwest of Boise.

So emboldened by opinions of two Pacific Northwest scientists, Martha harvested data and historical documents to make her case for the Eagle Foothills American Viticultural Area. Her petition sailed through the commenting period in June, so it could be just a matter of weeks until the Alcohol and Tobacco Tax and Trade Bureau establishes it as the Snake River Valley’s first sub-AVA.

“It’s important to have someone validate why we are doing what we are doing,” Martha said. 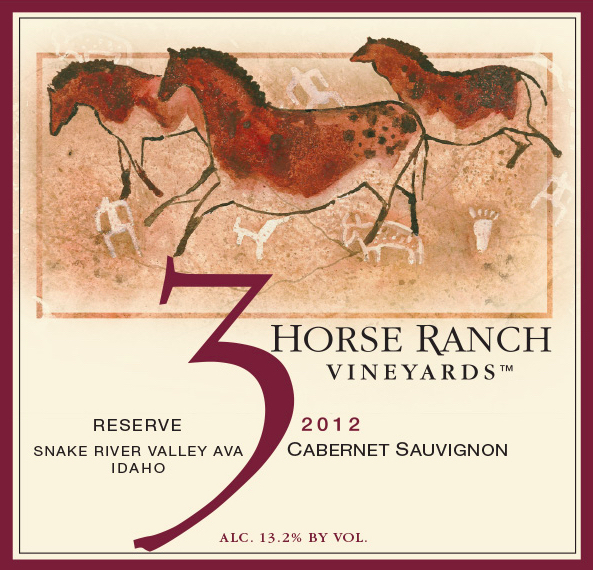 The key player in those efforts for recognition was Greg Jones, a professor at Southern Oregon University in Ashland and one of the world’s leading figures in climate research for viticulture.

“No. 1, the landscape is so unique from everything around it,” Jones told Great Northwest Wine. “The climate is clearly unique because of the drainage flow of the air that comes from the hills in the area around it. And I think the boundary was fairly easily definable. I think it makes sense.”

Some have wondered about the viability of growing wine grapes in this arid region, but Martha’s husband, Gary, and winemaker Greg Koenig have produced award-winning results from estate fruit under the 3 Horse Ranch Vineyards brand. Two decades ago, the Cunninghams bought 1,600 acres along Willow Creek Road and in 2002 began establishing their 46 acres of vines, which reach an elevation of 2,912 feet. Gary and Martha boarded horses — alongside their own three — to help pay for those vineyard plantings.

“People thought I was the craziest loon to walk the face of the Earth,” Gary said. “I ended up putting in 9 acres the first year.”

That was five years before the establishment of the Snake River Valley AVA, a watershed moment for Idaho’s wine industry.

Koenig, one of the Pacific Northwest’s top winemakers, oversees the Cunninghams’ winemaking program. Koenig has other clients, including his own Koenig Vineyards label. He’s marveled at the unique qualities of some 3 Horse Ranch Vineyards grapes, particularly Cabernet Sauvignon, which naturally arrive at his Caldwell vinification facility at reduced yields.

“The grapes come in with lower sugars but physiologically ripe, which is cool,” Koenig said. “I made a great Cab for them one year that was 13.1 percent alcohol, while all of the rest of us (in the region) are pushing 14.5 and 15 percent sometimes to get that green flavor out.

“Part of it is the weak soils out there. He doesn’t get much canopy, and the yields are low, but the fruit comes in ripe,” Koenig continued. “From a winemaker’s standpoint, that’s great. People have always commented on how the red wines especially are balanced and rich and ripe and not high alcohol.”

“Last November, we all got whacked by the precipitous decline in temperatures,” Koenig said.

Damage throughout the Snake River Valley — and portions of Washington’s Columbia Valley, too — prompted the Cunninghams to branch out beyond Idaho to meet the demands of their customers. That helps explain why bottles of 3 Horse Ranch Vineyards wines list AVAs such as Washington and Oregon.

Despite the many challenges, they’ve built 3 Horse Ranch into the largest family-owned winery in Idaho, ranking third overall in production, trailing only Ste. Chapelle and Sawtooth Estate Winery. (Both brands are owned by Precept Wine in Seattle). Annual production for 3 Horse Ranch stands at about 12,000 cases, but Gary said he could sell twice that if Idaho vineyards could supply him the fruit. Nearly 80 percent of 3 Horse Ranch wines are sold outside of his adopted state — a startling figure for a winery its size — so the Cunninghams serve as key ambassadors for the award-winning Idaho wine industry.

And thanks to their association with Koenig, the Cunninghams’ wines continue to shine in blind judgings.

The most recent acclaim for the Cunninghams’ program came Oct. 8, when the 3 Horse Ranch Vineyards 2012 Syrah-Mourvèdre earned a double gold and best of class at the 2015 Great Northwest Invitational. Cunningham is particularly proud of the estate Mourvèdre in the program.

“It’s a different beast out there,” Koenig said. “It’s so different (viticulturally) than what you read from publications, which all are from California, Washington and Oregon. The fruit is definitely distinctive, and you can tell that when you are tasting from the barrels. A couple of the nicest Cabs we’ve made are from there. They are super-low yield and the berries are tiny. The Cabernet and Syrah have good potential.”

The Cunninghams made an early splash with an organic approach the 3 Horse Ranch Vineyards estate grapes and lineup of wine, but they abandoned their certification several years ago.

Gary Cunningham, a consummate salesman, left Sacramento, Calif., and moved to McCall, one of Idaho’s famous resort communities, after a marketing career in the world of corporate business travel. He’s sacrificed his single-digit handicap in golf to dote on vines and grow the market for 3 Horse Ranch wines, while Martha heads up the tasting room. The self-described housewife with a P.E. degree from University of California-Davis swims in national competitions, and she also is an avid reader. A suitability analysis written in 2011 by Jones for the Idaho Wine Commission sparked her pursuit for an AVA.

“We’d lived on the ranch for almost 10 years by the time we planted grapes, and we thought we were in a special place,” Martha said. “When I saw Greg’s climate report and soil report, it solidified it. I thought we could be an AVA. That was in November 2011.”

Weather data helps draw the distinction between the Eagle Foothills and Caldwell on the Sunnyslope Wine District, 35 miles to the southwest. The average annual precipitation in Caldwell is 11.4 inches vs. 14.3 inches at 3 Horse Ranch Vineyards. There are an average of 2,418 growing degree days at the Cunninghams, while Caldwell is considerably warmer at 2,939 GDD. The average date of the last spring frost is April 24 in Caldwell with the first fall frost striking Oct. 7.

In Eagle, the Cunninghams see a tighter growing window. Historically, they don’t stop worrying until after May 12, then begin again Oct. 3.

In early 2013, Jones successfully petitioned the TTB to establish the Elkton Oregon AVA, and his experience was invaluable for the Eagle Foothills document. The rolling hills, sagebrush and dusty roads surrounding 3 Horse Ranch Vineyards are reminiscent of 30 years ago on Red Mountain in Washington’s Yakima Valley.

“As you are driving out, once you leave Eagle you won’t believe there is vineyard out there,” Jones said. “You just won’t believe it. The landscape is gorgeous. It’s the Wild West, but they are doing a nice job.”

It took a second draft before the TTB would accept Martha’s 63-page petition for the 49,815 acres that would be the first AVA entirely inside Idaho’s borders. Initially, it was called Willow Creek Idaho because Willow Creek flows through 3 Horse Ranch. There are two wineries on the East Coast named Willow Creek, but according to the TTB, the reason for the rejection was “the name evidence provided in the petition did not sufficiently demonstrate that the region is known by that name.”

In hindsight, the TTB likely did a favor for the Cunninghams, future growers and vintners.

“For us, changing it to Eagle Foothills was a really positive thing,” Gary Cunningham said. “In Idaho and the Treasure Valley, Eagle is pretty well known as the premium high-end market for property, so there’s a lot of identity with that.”

Clyde “C.J.” Northrup, a geosciences professor at Boise State University, shared his soil expertise for the petition. Northrup, with a doctorate from the Massachusetts Institute of Technology, also has winemaking in his background, including work last fall at Hat Ranch Winery. He views the soils as distinctive because of the granite pebbles mixed in with the volcanic ash/sandy loam, a sign of the Eagle Foothills’ position along the Boise Front and near the northern margin of Ancient Lake Idaho.

“Rather than multiple flooding events that stacked things up, there was a long-standing lake here that occupied the Snake River Valley — about the same size as Lake Michigan today,” Northrup said. “A lot of the rocks that we see here are lacustrine sediments that accumulated in that lake.

“There’s a mixture of material that washed from the highlands adjacent, so you have the granite that sits in the uplands north of Boise that produced some of the sediment, but there’s also the Yellowstone hotspot that was migrating its way along,” Northrup continued. “So there were big ash clouds that went out and rained down through the water column of the lake, as well.”

Northrup said he appreciated the collaborative effort and consensus building Martha took along the way.

“The Cunninghams could have drawn the boundary for a potential AVA around their own little valley, but they didn’t,” Northrup said. “Right from the get-go, there were community meetings and all kinds of ways to include people and make sure no one was alienated. Martha did a great job of handling the people, and so much of the (AVA process) is about people, in addition to addressing the science.”

Just a few months after the Elkton Oregon AVA was established, Jones had his name on another petition in front of the TTB.

“It took six months,” Martha Cunningham said. “We were determined.”

Aside from Koenig and his assistant winemaker Martin Fujishin, only one other commercial winemaker has spent much time working with grapes — Sangiovese — from the proposed Eagle Foothills AVA. (Cunningham manages those plantings for the vineyard owner).

In reality, though, the Cunninghams are the lone pioneers on a frontier in their own section of Idaho. It’s been a rapid climb since their first commercial vintage in 2006 and a production of 1,000 cases.

“We are the only commercial operation out here since Woodriver (Cellars) went out of business,” Gary said. “They weren’t growing grapes here, but they would have been part of the AVA. It would be such a huge help to us to have two or three other wineries here. We wanted those people to be successful.

“We are a destination because people come way out here for one thing and one thing only — our wines,” he added. “They have to spend a mile and a half on a gravel road to get here, no matter which direction you come from. It’s pretty hard to overcome that.”

Those dusty roads to reach 3 Horse Ranch Vineyards soon could get shorter. An Arizona developer reportedly is poised to launch the 6,000-acre M3 Eagle/Spring Valley Ranch community that would build homes, schools, business and agriculture. The economic recovery, not irrigation, has stalled the project.

“Eagle is an area where there are a number of nice housing developments,” said Jones, the Southern Oregon University professor. “It’s a beautiful, beautiful area, and then once you pass Eagle, you are in those foothills. If people get enough access to water, I think those are going to be great places to grow grapes.”

According to the AVA petition, the Spring Valley Ranch master plan includes 400 acres of vineyards. It’s unlikely they will be farmed as passionately as 3 Horse Ranch Vineyards, where only two of their original horses graze the nearby pastures.

“We’ve had zero money from anyone to help us with this,” Gary Cunningham said. “I think it’s been wonderful to put all this together and hopefully put Idaho on the map to an even larger extent when we have the first sub-AVA. It’s going to be huge to tell people, ‘This industry is growing.’ “