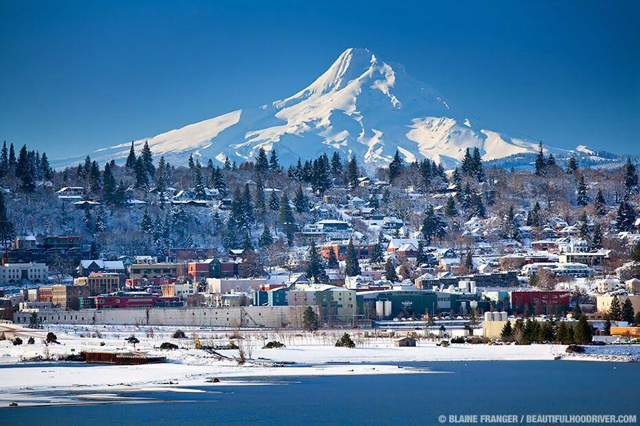 Mount Hood, the fourth-tallest peak in the Cascade Range at 11,249 feet elevation, looms over the town of Hood River, Ore., and the Columbia River. The scenery, climate and talented winemakers have turned the Columbia Gorge wine industry into one of the West Coast’s premier destination for outdoors enthusiasts and wine lovers. (Photo by Blaine Franger of BeautifulHoodRiver.com/Courtesy of Columbia Gorge Winegrowers Association)

HOOD RIVER, Ore. — If Valentine’s Day in Pacific Northwest wine country worked out well for you, then Travel Oregon and the Columbia Gorge Winegrowers Association have plans and an interactive map to follow.

This winter welcomes a free online guide called Gorge Wine Adventures, funded in part by the 5-year-old Oregon Wine Country license plate program. It is designed to promote culinary tourism for the scenic Columbia Gorge during the shoulder seasons, which the area’s award-winning wine industry has helped restaurants and hotels to weather.

“We are very excited to announce the release of the first trail in a series of Gorge Wine Adventures,” Nicole Backus, co-executive director of the Columbia Gorge Winegrowers Association, wrote in a news release. “With the support of a matching grant from Travel Oregon and the collaboration of local Gorge businesses, we present ‘A Winter’s Trail: Hood River.’ ”

The Columbia Gorge offers some of the Pacific Northwest’s top wines, and the region’s geology, climate and recreational opportunities — within an hour’s drive of Portland International Airport — combine to rank it among the best wine touring destinations in the United States and a road trip worth preparing for.

And yet, many wine lovers in Portland choose dreary Interstate 5 or the stop-and-go frustration of Highway 99 to visit the Willamette Valley rather than hop on Interstate 84 and drive along the majestic Columbia River with the windshield framed by Mount Hood and the foothills of Mount Adams. 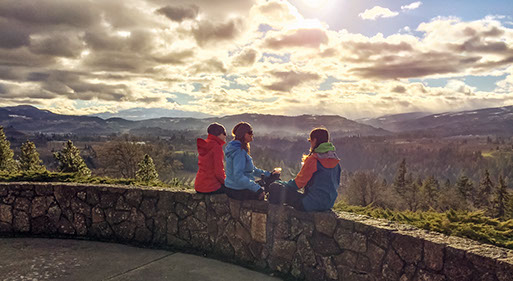 The array of wine touring options makes it impossible for the debut of Gorge Wine Adventures to cover all the angles, but the website construction by David Lloyd Imageworks provides an amazing recruiting tool for wineries, restaurants and overnight options on both sides of the Columbia Gorge.

This inaugural two-day “Winter’s Trail” starts with a morning visit to Multnomah Falls. The itinerary places the wine lover in Hood River in time for lunch and suggests Boda’s Kitchen, a delicatessen that encourages travelers to call in an order for a wine-themed picnic lunch. It can be made ready to be picked up.

With a full stomach, the trail maps out stops to three downtown Hood River tasting rooms — Springhouse Cellar, historic The Pines 1852 and provocative Naked Winery. There’s suggested overnight lodging, followed by a morning stop at another tasting room in Hood River, Cerulean, before taking a short drive to Panorama Point County Park south of town and then returning home that afternoon.

Two more trails are scheduled to be released in 2016 and illustrated again by David Lloyd Imageworks, leading wine lovers to other corners of the Columbia Gorge. In April, the plan is to launch an itinerary for eastern end of the Gorge. In September, after school is back in session, wineries in the Hood River Valley are scheduled to gain the spotlight.

“A World of Wine in 40 Miles” is the catchy and fitting slogan adopted by the Columbia Gorge Winegrowers Association, which continues to grow along the Columbia River in both Washington and Oregon. The federal government established the Columbia Gorge American Viticultural Area in 2004, and the AVA features about 500 acres of vineyard. Its amazingly diverse climate and geology allow for a range of more than 40 grape varieties to be grown, spanning Albariño to Zinfandel planted from nearly sea level to nearly 2,000 feet elevation.