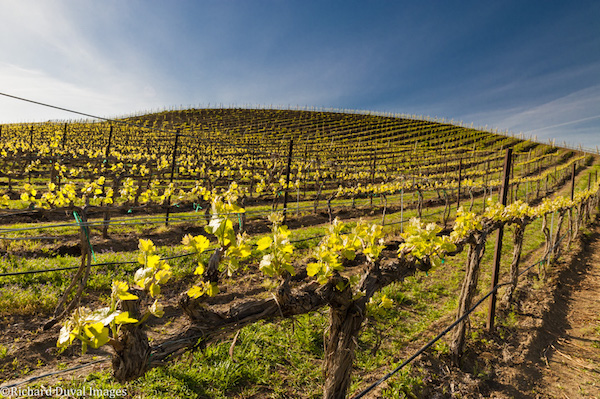 It has been a warm and frost-free spring in Washington’s Columbia Valley. Wine grape growers are reporting no winter damage and predicting a warm vintage. (Photo by Richard Duval/Vine Lines)

A mild winter and warm spring have Washington wine grape growers happy to see frost season in their rearview mirrors.

“Everything is great,” said Jarrod Boyle, owner of Alexandria Nicole Cellars and Destiny Ridge Vineyard in the Horse Heaven Hills. “We didn’t even turn on the wind machines this year. We’re pretty fortunate.”

Traditionally, wine grape growers begin breathing a little easier once Mother’s Day arrives, as that’s when the threat of spring frost passes. For Rick Small, owner of Woodward Canyon Winery in the Walla Walla Valley town of Lowden, he’ll keep an eye on weather forecasts for another 10 days or so.

Small said he experienced no winter damage in his estate vineyard in the northwestern corner of the Walla Walla Valley, and his growers from elsewhere in the vast Columbia Valley report no issues.

“There’s no winter damage at all,” he told Great Northwest Wine. “The vines look good. If anything, it looks to me like we could be set for a fairly large crop. You can already see several clusters.”

Boyle anticipates seeing bloom – when the clusters flower and begin to form tiny grapes – in another week or so. This is well ahead of schedule, as Washington grape growers often don’t see this until the last week of May or even early June.

Boyle also is making changes at his vineyard. This winter, he pulled out all of his Lemberger – about 9 acres of it – and replanted it with Cabernet Sauvignon. For Boyle, it was primarily for economic reasons. Lemberger has fewer than 100 acres left in Washington and doesn’t fetch a lot of money per ton. Meanwhile, winemakers can’t get enough Cabernet Sauvignon, especially from the Horse Heaven Hills.

Ste. Michelle likes what it sees 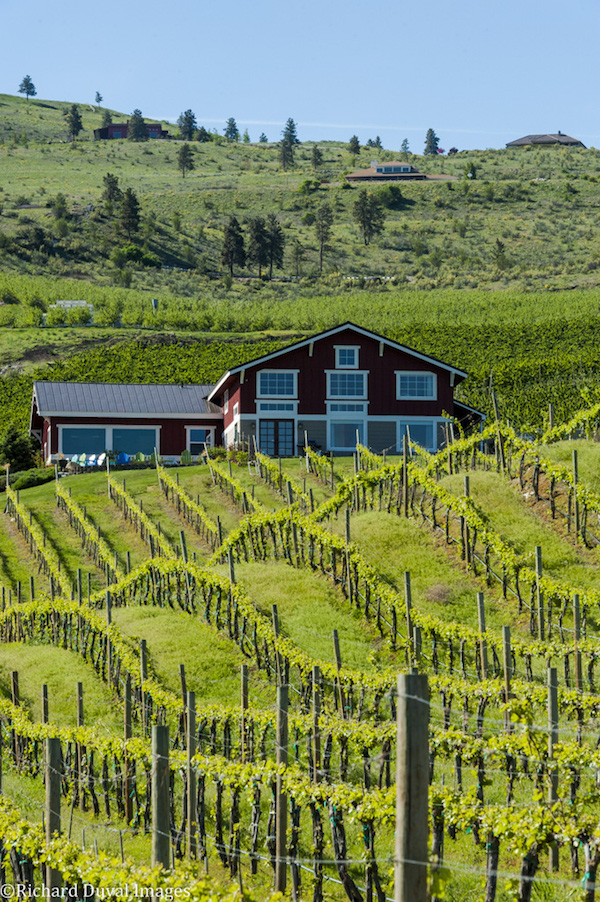 Nefarious Cellars is on the south shore of Lake Chelan. Bud break and early growth have been normal or early across Washington wine country. (Photo by Richard Duval/VineLines)

Kevin Corliss, vice president of vineyards for Ste. Michelle Wine Estates, is one of them. Though he doesn’t have exact numbers, he is expecting another increase in Cabernet Sauvignon crop from the Horse Heaven Hills, thanks to several new vineyards coming into production as they reach their third year in the region’s sandy soils.

“We’re going to get some more grapes for sure,” he said. “A lot more Cab is coming on.”

Vast vineyards surrounding the tiny community of Alderdale are primarily planted on behalf of Ste. Michelle Wine Estates, which uses two out of every three grapes grown in Washington for such wineries as Chateau Ste. Michelle, 14 Hands, Columbia Crest and Snoqualmie. Ste. Michelle executives like to refer to the Alderdale area as “Andrewsville” and “Mercerland” because of growers such as Mike Andrews, Rob Andrews and the Rob Mercer.

Corliss, who oversees all vineyard operations for Ste. Michelle, can provide a broad view of the Columbia Valley – from the Horse Heaven Hills in the south to the Wahluke Slope and Columbia Basin in the north. From his outlook, it’s been a good spring.

“It looks pretty good from our perspective,” Corliss said. “It was a mild winter. We skated through pretty well. Clusters are healthy, and so far, it looks pretty normal.”

It also looks early, he said. Bud break was in late March and early April – perhaps slightly ahead of normal for Washington. But then it warmed up, and the vines love it.

“Now I’m thinking we’re definitely ahead,” he said. “In April, we picked up a lot of heat units, and things got rockin’.”

Corliss said mild winters are good for young vines because they can be more easily damaged by the bitter cold that sometimes descends on the Columbia Valley.

Jessica Munnell, winemaker for Mercer Estates in the Yakima Valley town of Prosser, is gearing up for another warm growing season – just as she and other winemakers have faced since 2013.

“One of the great things about Washington is our hang time,” she said. “Septembers are so beautiful, and we can let the grapes hang and develop flavor.”

But that also means she needs to keep an eye on the fruit’s chemistry, as she doesn’t want the grapes’ natural acidity drop too much until they are ripe. It’s all a balancing act.

At this point, Munnell is expecting 2016 to be similar to 2015, which saw record heat and the earliest start to harvest on record in Washington: Aug. 6 on Red Mountain.

“I haven’t fired up our wind machines once,” he said. “There’s no winter damage that I’m aware of, and the grapes are growing like crazy.”

Williams farms about 300 acres of vines on Red Mountain, and he’s adding a small, 3.5-acre block of Cabernet Sauvignon up the slope of the ridge. He also has a cherry orchard – the only nongrape crop grown on Red Mountain.

“There’s not many cherries on them this year. I don’t really know why, “he said, adding with a grin, “I’m glad I’m not a full-time cherry farmer.”