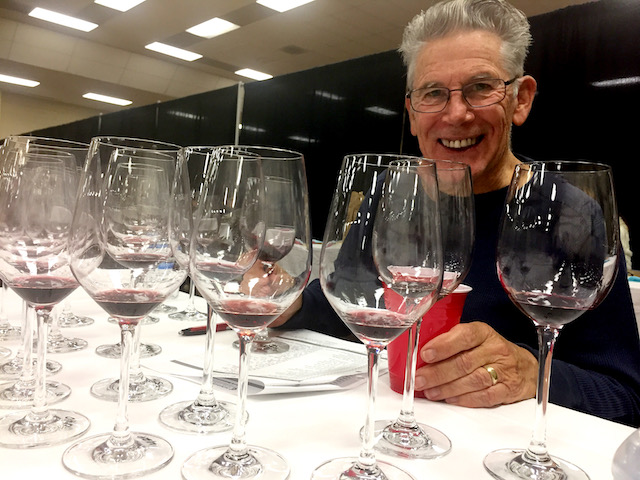 Mike Dunne spent 30 years at the Sacramento (Calif.) Bee in a career that spanned food editor, restaurant critic and wine writer. At the San Francisco Chronicle Wine Competition, he writes a review for every best-of-class winner. (Photo by Eric Degerman/Great Northwest Wine)

CLOVERDALE, Calif. – Mike Dunne is one of the 140 people who worked the 2019 San Francisco Chronicle Wine Competition, and nearly every one of the organizers, judges and volunteers views the scribe’s job with various levels of jealousy.

The longtime wine writer for the Sacramento (Calif.) Bee returned last week to the sleepy Sonoma County town of Cloverdale where he reprised his unique role at the largest judging in the United States. That is to generate a review for each of the 180 best-of-class wines. It’s a task that requires decades of perspective, thoughtful intensity and a good reporter’s ability to write compelling copy quickly with clarity and without repetition. The backroom of a wine competition can be filled by the same type of clatter, conversations and calamities that make the newsroom at a daily newspaper such a hectic yet energizing workplace.

That’s why Dunne is the perfect fit for this delicious job. Last week, he worked on a contract basis for competition director Bob Fraser, and it’s a role Dunne is not unfamiliar with. (He served as chief judge at the 2016 Great Northwest Invitational Wine Competition in Oregon.) Last week, it meant the graduate of San Jose State’s journalism program logged more hours at the Cloverdale Citrus Fairgrounds than any judge. The payoff for his evaluations and eloquence during the course of the competition’s three full days leading up to the Friday morning sweepstakes imbues him with a unique prism of the industry.

“Among the best-of-class wines, the biggest trends probably would be the dialing back of oak,” Dunne told Great Northwest Wine. “They were leaner overall, although there were still some that were very ripe and husky and fat. There is less sugar and more dryness coming through. Overall, there’s just more finesse and kind of a drifting away from being fixated on the ‘international style’ – something that would be representative of Cabernet or Merlot any place.”

Dunne retired in 2008 after a 30-year career at the Bee that included serving as the food editor, restaurant critic and wine columnist. Fortunately, he continues to write a regular wine column for the McClatchy publication. He’s long been one of the most sought-after wine judges in North America, and last week he voiced an appreciation for the continued expression of terroir poured into bottles by winemakers across the country.

“Vintners are taking more seriously an attempt to reflect a wine’s sense of place,” said Dunne, who will serve as a guest critic and panelist later this month at the fourth annual Oregon Tempranillo Celebration. “I haven’t done any comparative figures yet, but it seemed there were far more vineyard-designated wines and wines from smaller appellations in the best of class.” 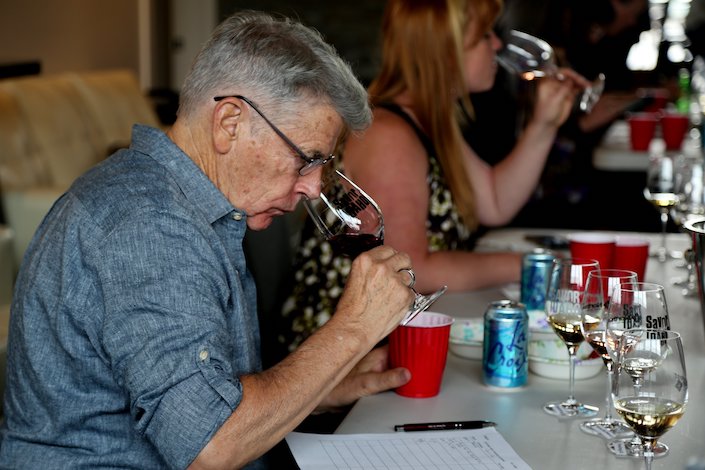 Among the topics discussed by the 20 judging panels during the week was the view that U.S. wines continue to be more food-friendly. Dunne found that reflected in many of the category winners that came across his desk in the concrete catacombs of the historic fairgrounds. Cloverdale remains home to California’s first fair of the year.

“Acidity levels were not nearly as flabby as some of them have been in the past,” Dunne said. “A higher percentage of the wines this year seemed like they would work at the dinner table better than they have in the past – and not being cocktail wines.”

He enjoyed the various styles of Malbec and Tempranillo that judging panels heaped praise on and nominated for the sweepstakes.

“They were statement wines in their own right,” Dunne said. “In terms of the Tempranillos, one was bigger. One was leaner, more elegant.”

Grenache also continues to catch his eye, as did the broad spectrum of red blends. They now constitute the largest category at many competitions in the U.S., and span myriad price points. There were nearly 40 categories of red blends at last week’s judging, and Fraser distinguished each category by the leading variety in the wine.

“I think the popular perception is that red blends are almost universally sweet, but that certainly was not the case with the best-of-class wines,” said Dunne, who served as chief judge at the California State Fair for several years. “A couple of them were – and they probably were meant to be – but most were toward the drier side.”

Understandably, at the end of Tuesday, Wednesday and Thursday, Dunne would greet anyone with a smile if they offered him a beer. But you wouldn’t find him at a tavern after dinner. His role with event and the industry is too valuable for him to burn the candle at either end.

“Mike’s reviews appear on WineJudging.com to give the consumers an idea of what those wines are about from the standpoint of a professional judge,” Fraser said. “It just adds another element of information, especially to get our millennial consumers more excited about national wines.”

As is tradition, San Francisco’s Fort Mason Center Festival Pavilion will stage a public tasting of the competition’s top wines. The event, this time on Saturday, Feb. 16, has been a sellout for the past eight years. An advance ticket for the three-hour afternoon festival costs $70. Admission is $95 at the door. Ironically, the public tasting lands in the middle of the Cloverdale Citrus Fair during Presidents’ Day weekend. 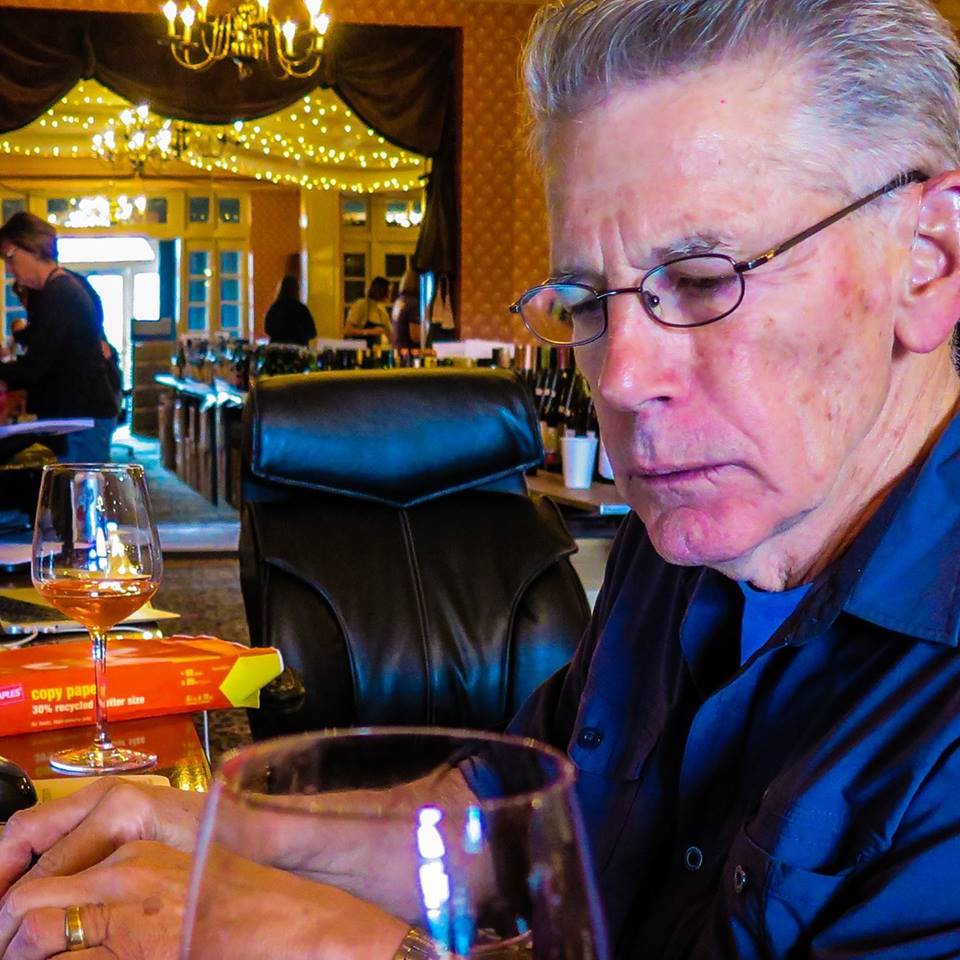 And to help whet the whistle, Dunne shared his reviews of Northwest-grown, best-of-class winners:

A to Z Wineworks 2016 Pinot Noir, Oregon, $20: The first role of pinot noir is to be charming, which is what the A to Z is all about, from the clean, unaffected berries of its aroma and flavor through its lean build to its lingering and inviting finish.

Cellardoor Winery 2017 Chenin Blanc, American, $16: Often dismissed as a picnic wine, chenin blanc nonetheless can occasionally play with the big boys (chardonnay, sauvignon blanc) at a table set with husky and varied foods. The Cellardoor is one of those for its mature fruit suggestive of pears, its dry delivery and its round but peppy body.

Cellardoor Winery 2017 Riesling, American, $16: A lovely riesling, floral and fruity, the latter running to peach and pear, with a thread of lemongrass. Made in Maine from grapes that could have been grown anywhere, but someplace where riesling shines, to judge by the wine’s authority, freshness and balance. Another confirmation that fine wine is being produced in every corner of the country.

College Cellars of Walla Walla 2016 Cockburn Vineyard Syrah, Walla Walla Valley, $30: Viticulture and enology students at Washington state’s College Cellars must all have earned an “A” for this elegant syrah, which conveys cleanly all the grape’s traditional suggestions of blueberries and smoked meats in aroma and flavor, wrapping them with tannins so gentle they won’t keep anyone from savoring the wine all on its own.

Élevée Winegrowers 2016 Bjørnson Vineyard Pinot Noir, Eola-Amity Hills, $48: A profound pinot noir that stands out for the richness and blitz of its fully evolved strawberry/cherry/berry fruit, backed up with a substantial structure, peppery spice and vigorous acidity.

14 Hands 2015 The Reserve Red Blend, Horse Heaven Hills, $35: A wine that could come from only one place, it is that distinctive. The place is Washington’s Horse Heaven Hills, which here has yielded a wine voluptuous, layered and persistent. This is a special-occasion wine, to be relished now or to be laid down for children and grandchildren born in 2015.

Huston Vineyards 2017 Chicken Dinner White Wine, Washington, $16: There are all kinds of stories that can be told of this wine, from its zany name to why an Idaho winery is using a Washington appellation, but suffice to say that in the glass it was the best of its class against 36 other entries, a testimonial to its sunny fruit, lilting sweetness, pointed spice and just downright pleasure. Yep, it’s perfect for chicken dinner, however prepared.

StoneRiver Winery 2015 Tempranillo, Rogue Valley, $28: An exceptionally fragrant and luxuriously textured tempranillo, its aroma and flavor alluring for its sweet suggestions of cherries, berries, nuts, smoke and even mortadella. Oregon has several winemakers seriously exploring the potential of tempranillo, and the authority of this release validates their confidence that they have the setting to do well by the variety.

Tertulia Cellars 2015 Cabernet Sauvignon, Walla Walla Valley, $45: Intense yet approachable, this child of the Walla Walla Valley shows by its sunny fruit and abiding equilibrium why the region is growing in stature.

Walla Walla Vintners 2016 Cabernet Franc, Columbia Valley, $35: With remarkable precision, both the herbal and fruity sides of cabernet franc are seized in this dry, lean and vibrant take on the varietal. It is straight-forward but charmingly nuanced, a truly noble cabernet franc.

Walla Walla Vintners 2016 Sangiovese, Columbia Valley, $30: Perfumey and fruity, this sangiovese shows that the variety can make a gleeful statement on behalf of character and place beyond Tuscany.