Note: This is the first in a four-part series on Northwest Pinot Gris.

British Columbia makes some of the world’s best Riesling, yet the same could be said of Pinot Gris.

Success extends beyond wine competitions and vineyards and into the market place as Pinot Gris is on the verge of becoming the most popular white grape in the province.

“The best example I can give is that our Private Reserve Pinot Gris traditionally has been sold out in 12 months, but last year, it was six months,” said Walter Gehringer of Gehringer Brothers Estate Winery in Oliver. “It was just the absolute flavor of the day. It’s been a steady gain, but that spike was almost unheard of. And I know Pinot Gris is a major selling force with the liquor board.”

The 2012 harvest report provided by the B.C. Wine Institute indicated Pinot Gris is the province’s third-most-popular variety, well behind Merlot at No. 1 but narrowly trailing Chardonnay. Signs of the surge in Pinot Gris’ popularity in the region will be a major topic during the third annual Oregon Pinot Gris Symposium at Oak Knoll Winery in the Portland suburb of Hillsboro.

Perhaps the most important reason for its success in Canada because of its food applications, according to Hagen Kruger, who makes the wines for his family’s Wild Goose Vineyards in Okanagan Falls.

“We had some salmon and Pinot Gris the other night, and there’s no better pairing. It was fantastic,” Kruger said.

Both Gehringer and Wild Goose create some of the best Pinot Gris on the West Coast. Gehringer’s 2012 Private Reserve Pinot Gris recently earned a gold medal at the Los Angeles International Wine Competition. Red Rooster Winery in Penticton also received a gold medal there for its Pinot Gris.

“Pinot Gris has been an alternative for the ‘anything but Chardonnay,’ and it’s been building for a long time,” Gehringer said. “The heavy oak Chardonnay drove it over the wall, while the Italians always have had the Grigio style, so it was a case of ‘Let’s look at this.’ It grows well here in the Okanagan, survives the winters and has adapted to this area.”

Last year, there were 2,788 tons of Pinot Gris picked, nearly twice that of Gewürztraminer (1,513) and Riesling (1,309). All three are made in a food-friendly style at Wild Goose, where Hagen and his brother Roland, the winery’s general manager, focus more attention on their white program than maybe any other winery in the Pacific Northwest.

“Roland and I grew up in Vancouver, so we are very well aware of the ethnic diversity in the Lower Mainland and the rise of Asian cuisine,” Hagen Kruger said. “That’s the market that we try to target when we’re making these wines, and they pair so well with West Coast cuisine.”

And it might not take Pinot Gris long to overtake Chardonnay production in British Columbia. The gap last year was less than 200 tons.

Pinot Gris production in BC may overtake Chardonnay in 5 years

“I think a lot of the Chardonnay you are seeing was planted early on- 20 years ago – where the Pinot Gris plantings are younger,” Kruger said. “I can see a point in time when Pinot Gris overtakes Chardonnay. I would say within five years.

“It comes back to the great pairings with seafood. Pinot Gris goes a lot better with the food we have on the West Coast, although Chardonnay with fresh crab and garlic butter also is pretty hard to beat,” Kruger added with a chuckle.

Food applications are playing a huge role with regards to white wine production and sales in British Columbia, Gehringer said, which helps explain why he and Kruger can see Sauvignon Blanc challenging both Pinot Gris and Chardonnay as the province’s top white wine.

“The increase in white wine demand has been heavily weighted toward Gris for a while, and there are a few dynamics that are coming into play,” Gehringer said. “Many of the food styles of the region go well with the Gris, and I think the wineries understood it was important to do the Grigio style with a clean presentation of fruit.”

In British Columbia, it’s also worth noting that many of the winemakers were trained overseas. For example, both Gehringer brothers bring European training to their wines. Walter graduated from Germany’s University of Geisenheim with a degree in viticulture and enology, while Gordon graduated from Weinsberg. Their Pinot Gris doesn’t feature with much of an oak profile, and that goes for most of the province.

“The variety does quite well from top to bottom,” Gehringer said. “The best are not really overly ripe and done in a Grigio style. You want some acidity because you want some life in the wine. And it makes for a more refreshing glass of wine that goes with light lunch. They go hand-in-hand.”

Many strive for fruit-forward, crisp approach

Kruger strives for a fruit-forward style with Wild Goose’s remarkable Pinot Gris from Mystic River, a small estate vineyard just north of Oliver that also shines for its Gewürztraminer and Pinot Blanc. 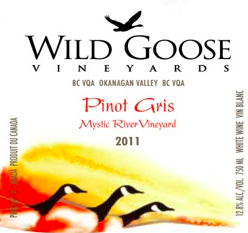 The Mystic River Pinot Gris is very intense, very ripe and varietally correct,” Kruger said. “There’s a lot of apricot, and the honeydew melon note is very obvious. Those are some of the things I think are very consistent with it, and just the mouth feel in general. You get some nice weight in the mouth feel, and I’m always looking for balance to be around 13 grams of residual sugar and 7 grams of acidity.”

In the vineyard, he brings in the grapes between 22 and 22.5 brix. In the winery, he’ll administer a bit of oak.

“We do 20 percent barrel fermentation, which gives it some spice and adds to the mouth feel,” Kruger said. “Some years, you might pick up some coconut and tropical notes, which also come from the oak.”

It didn’t take long for the Krugers to dial in their winemaking practices with Pinot Gris in the Okanagan Valley, which they believe is dominated by clones 53 and 47.

“We produced our first Pinot Gris from a vineyard just south of Vaseux Lake – the Elgert Vineyard,” Hagen remembers. “We crushed and let it sit on the skins overnight, and by the time we pressed it off had turned it into a wine it was very, very pink! The next year, we only gave it about six hours on the skins and that wine went on to win our first gold medal for Pinot Gris.”

Wild Goose Vineyards produced more than 3,000 cases of Pinot Gris from the 2012 vintage, which is about one third of the winery’s total production. The Mystic River Pinot Gris accounts for 550 cases of that. None of that gets blended into the 2,500 cases of Wild Goose Pinot Gris, most of which is farmed farther north in the Okanagan Valley and carries more notes of green nectarine, apricot and earthiness, in part because the soils are more clay, Kruger said.

“We had one of our growers here who came by to pick up some wine, and he said the 2012 Mystic River was “the best Pinot Gris you’ve ever made,” Kruger said. “He doesn’t always say that. In years past, he’ll say, ‘It’s OK.’