Grape grower Dick Boushey talks Thursday about 20 acres of prime Red Mountain land that was purchased this week by Duckhorn Vineyards in Napa Valley. Boushey will plant and manage the vineyard for Duckhorn. (Photo by Andy Perdue/Great Northwest Wine)

A famous Napa Valley winery has found its place on Washington’s Red Mountain.

A few weeks removed from being aced out of buying vineyard property in a highly anticipated land auction, Duckhorn Vineyards in California has purchased 20 acres of prized ground in Washington’s highest-profile appellation.

Reber also revealed the name of Duckhorn’s new Red Mountain-based wine brand: Canvasback. The first wine, a $40 Cabernet Sauvignon from the 2012 vintage, will be released around Labor Day 2014. The wine is being made by Bill Nancarrow, Duckhorn’s executive winemaker, at Artifex, a winemaking facility in Walla Walla.

The Red Mountain land, which Duckhorn completed sale of Wednesday, will be across the road from Col Solare, a joint-venture winery between Ste. Michelle Wine Estates in Washington and the Antinori family of Italy. The two partners also own iconic Stag’s Leap Wine Cellars in Napa Valley, not far from Duckhorn-owned Paraduxx Winery.

“We’re very excited to have more neighbors with the distribution and horsepower to raise Red Mountain’s reputation as a premier growing region,” said Ryan Pennington, senior communications manager for Col Solare. “The more good wines from Red Mountain that get into the mouths of consumers around the world, the better it is for Red Mountain.” 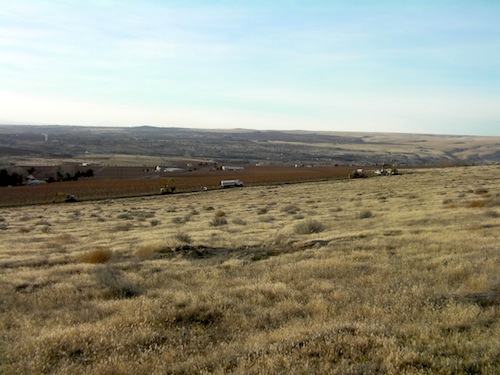 Duckhorn will plant 18.5 acres of Cabernet Sauvignon and other Bordeaux grapes on this undeveloped land high up the slopes of Red Mountain. (Photo by Andy Perdue/Great Northwest Wine)

Duckhorn’s new vineyard will be second in elevation only to Force Majeure. It offers dramatic views of most of the vineyards on Red Mountain, as well as the Yakima Valley and Mount Adams in the distance.

“It’s the perfect opportunity for Duckhorn,” Boushey told Great Northwest Wine. “They’ve been making wine here for two vintages now, and they really like being up here. They’re making a big commitment to Washington.”

At 4,040 acres in size, Red Mountain is Washington’s smallest American Viticultural Area, or appellation. An estimated 1,400 acres are planted so far. The greatest barrier to more vineyards has been water for irrigation. The Kennewick Irrigation District is installing a system that will bring water from the nearby Yakima River by next spring.

Red Mountain began to gain acclaim after John Williams (Kiona Vineyards and Winery) and Jim Holmes (Ciel du Cheval) began planting grapes on it in 1975. Today, it is highly regarded for its red wine grapes and fetches the highest prices per ton in Washington. Red Mountain, in the eastern Yakima Valley near the town of West Richland, also is the warmest growing area in Washington.

Less than a month ago, Duckhorn was an active participant in an auction for more than 500 acres of Red Mountain AVA land owned by the Kennewick Irrigation District. In fact, Duckhorn CEO Alex Ryan attended and personally directed Duckhorn’s efforts to purchase land. Ultimately, Aquilini, a company in Vancouver, British Columbia, managed to purchase all the land, leaving Duckhorn with nothing.

However, Duckhorn had already been looking at the land it purchased this week for several months and finally convinced the longtime landowners to sell.

“I’ve been selling them fruit for two years from a vineyard I manage and pointed out this property,” Boushey said. “We dug nearly 100 holes and did some soil profiles. It came out way better than I expected.”

Boushey – and others – originally ignored the property because it didn’t seem viable. But once he gained access to the land and was able to start evaluating the soil, he became convinced it could well be some of the best in the AVA.

The 20-acre parcel stretches from 1,100 feet in elevation down to just below 1,000 and has few unplantable areas. Duckhorn plans to plant 18.5 acres in the spring, primarily to Cabernet Sauvignon, as well as other Bordeaux varieties.

“It won’t be hard to develop,” Boushey said. “It’s all very plantable because of how it lies.”

When at full production, the vineyard could yield enough fruit for about 4,000 cases of wine.

Duckhorn started in 1976 and is based in St. Helena, a Napa Valley town. It has since launched such brands as Paraduxx, Goldeneye, Migration and Decoy. All the names play off the “duck” in Duckhorn. That tradition continues with the new Red Mountain brand: Canvasback ducks have breeding grounds in Washington.

Duckhorn has no immediate plans to build a tasting room or winemaking facility on Red Mountain.

“Right now, it’s strictly vineyard land,” Reber said. “We dream about a tasting room presence, but the vineyards are always first. They are the backbone of all our brands. We are absolutely dedicated to making and crafting wines with a profound sense of place.”