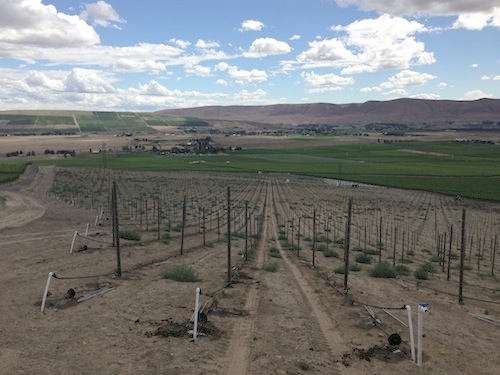 Longwinds Vineyard, owned by Duckhorn Wine Co. for its new Canvasback winery, is high on Red Mountain and has grapes planted, thanks to some help from Ste. Michelle Wine Estates. (Photo by Andy Perdue/Great Northwest Wine)

The 20-acre site high on Red Mountain was planted in mid-June, thanks to Ste. Michelle Wine Estates, which co-owns Col Solare across the road.

Duckhorn announced last year that it was launching a Washington winery called Canvasback using Red Mountain grapes. The first wine, a $40 Cabernet Sauvignon from the vaunted 2012 vintage, will be released Sept. 1. The wine was made at Artifex, a custom-crush facility in Walla Walla, and was bottled in May. In June, it hired Brian Rudin as its winemaker. Rudin was the head winemaker for Cadaretta Wines in Walla Walla for four years and will continue to make the Canvasback wines at Artifex.

Because of a delay by the Kennewick Irrigation District in completing its new Red Mountain water district, Duckhorn didn’t think it would be able to plant any grapes at its new vineyard, which has been named Longwinds.

Doug Gore, Ste. Michelle’s vice president for winemaking, viticulture and operations, heard about the dilemma and mentioned it to his boss, CEO Ted Baseler.

“Ted jumped right on it,” Gore told Great Northwest Wine. “He said that if we can help them out, let’s do it. We’re pleased to have them as neighbors.”

Ste. Michelle allowed Duckhorn to use its irrigation system on Red Mountain to get water to its new vineyard. To do this, a Yakima judge had to temporarily transfer Duckhorn’s water rights to Ste. Michelle, a relationship that will last this year.

Dick Boushey, considered one of Washington’s top grape growers, manages Col Solare and was hired by Duckhorn to plant and manage Longwinds. That connection helped with the temporary relationship.

“It’s been frantic,” Boushey said. “But it’s turned out better than I thought. I’m sleeping better at night now.”

Boushey managed to fit 18.5 acres of vines on the land. Of that, 75 percent comprises three clones of Cabernet Sauvignon, with the rest dedicated to Merlot. The land was purchased in December, a few weeks after Duckhorn and several other companies failed to buy any of about 500 acres of Red Mountain land at an auction. During the auction, the owners of the National Hockey League’s Vancouver Canucks purchased everything available – 670 acres in and around the Red Mountain American Viticultural Area.

For Ste. Michelle to provide the delivery of water to Duckhorn is business as usual for the Woodinville-based company.

After the devastating 1996 winter freeze that decimated about half of the vineyards in Washington, Ste. Michelle sold grapes to Leonetti Cellar and other wineries. Gore said that while it might seem counterproductive to provide grapes to a direct competitor, the company’s view is it helps the entire Washington wine industry to have the top players selling their wines.

“It keeps visibility of Washington strong,” Gore said. “It helps everyone in Washington. That’s who we are.”

Gary Figgins, owner of Leonetti Cellar, told Great Northwest Wine that he was scrambling in the fall of 1996 to find grapes anywhere he could – even California. He said that Ste. Michelle and Columbia Winery both provided him with fruit, with legendary winemaker David Lake calling him and offering valuable Otis Vineyard Cabernet Sauvignon.

“There was not much to go around that year,” he said. “David Lake called me out of the blue and offered me grapes. He and Ste. Michelle both helped us out that year. They were great guys.”

Duckhorn gains a vintage with planting 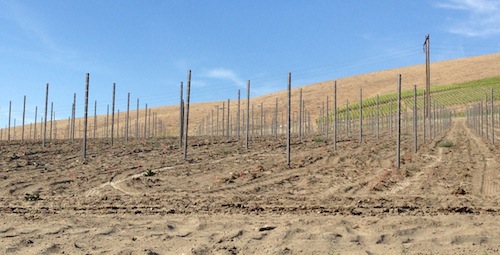 Getting the Longwinds grapes planted this year gives Canvasback an extra year in the ground that it didn’t expect just a few months ago.

“It’s really exciting to be a year ahead,” said Carol Reber, chief marketing and business development officer for Duckhorn. “We were lucky to be the recipient of Ste. Michelle’s help.”

Boushey said getting the grapes into the soil now means the company will be able to harvest fruit from Longwinds as early as 2016. And he was just happy to find enough plants to put in the ground because there’s a serious shortage of grape material right now.

The vineyard is in a prime location high on the slopes of Red Mountain, a 4,040-acre appellation in the eastern Yakima Valley. The land is across the road from Col Solare and just below Force Majeure. The top of the vineyard is about 1,200 feet in elevation, and Boushey said its risk to frost damage is low until late November in a typical year.

The grapes for the 2012 vintage of Canvasback came from Klipsun, Shaw, Quintessence and Ambassador vineyards. Reber said that as the estate vineyard is established and moves into production, Duckhorn plans to continue to keep its current fruit sources and expand production with its own grapes.

When at full production, the Longwinds vineyard could produce enough grapes for about 3,500 cases of wine.