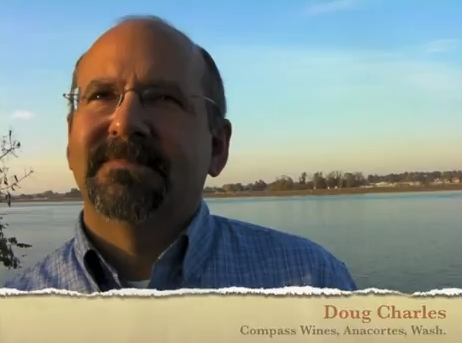 Charles was awarded the Walter Clore Honorarium, which recognizes an individual who has demonstrated dedication to the advancement of the Washington wine industry.

More than 75 percent of the inventory at Compass Wines is made in Washington, and he lines up with some of the state’s top vintners to create the wines for his ded.reckoning label.

Visconti’s of Wenatchee, co-owned by Daniel Carr, was named Restaurant of the Year, and Thomas Price of Metropolitan Grill in Seattle received the Sommelier of the Year award as part of the ceremonies at McCaw Hall.

Carr has introduced Washington wines to his customers for more than a decade. He won the Winemaker’s Choice Award in 2009 for his work at Visconti’s of Leavenworth. In 2002, Carr and partner Candy Mecham received the Restaurant Appreciation Award from the Washington Association of Wine Grape Growers.

“These exemplary businesses and individuals help us spread the word that Washington state has a reputation for premium wines with superior quality across a range of varietals and distinctive character exhibiting a unique balance of the Old World and New World,” Steve Warner, president of the Washington State Wine Commission, said in news release.

This marked the 11th year for the Washington Wine Commission’s awards program, but the first time since being rebranded. Winners were selected from more than 100 nominations and were chosen based on their menus, educational programs, marketing efforts and service.

Shayn Bjornholm, a master sommelier who won the inaugural top sommelier award in 2003 while at Canlis, served as the master of ceremonies. The event included a pouring of wines from 60 state wineries.